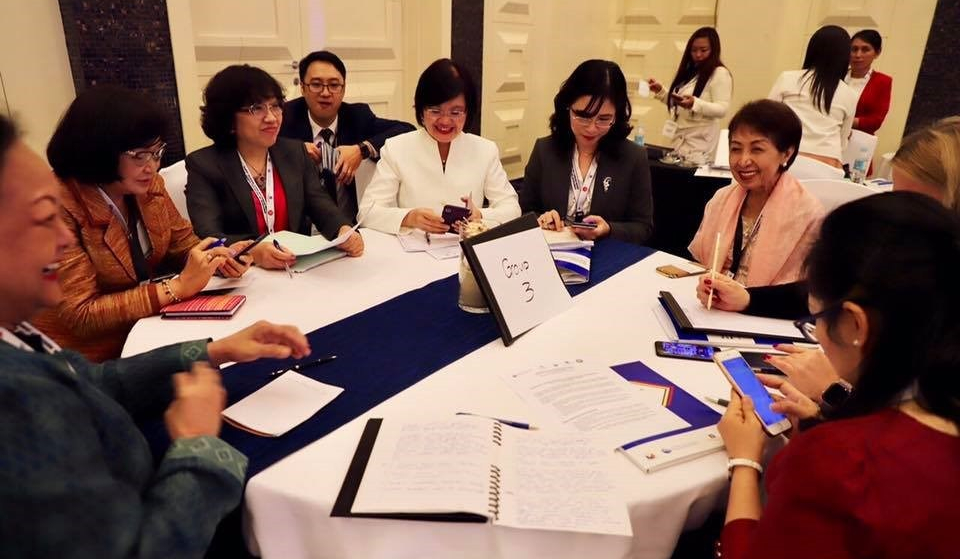 ​MACTAN ISLAND, Cebu – Around 60 women leaders from the Association of Southeast Asian Nations (ASEAN) Member States gathered here on December 13, 2018 to share their narratives, knowledge, and experiences in gender mainstreaming as well as hone women’s capacities in their respective countries to contribute in building sustainable peace within the ASEAN.

A fruit of the partnership between the Office of the Presidential Adviser on the Peace Process (OPAPP) and the ASEAN Women, the “Symposium on the Establishment of the ASEAN Women for Peace Registry (AWPR)” included topics on the role of women in peace and security, women’s achievements, and the promotion of respect for human dignity and human rights under the context of peace reconciliation and conflict resolution.

During her part on the Operationalizing the “Joint Statement on Promoting Women, Peace and Security (WPS) in ASEAN,” OPAPP Undersecretary Diosita T. Andot reaffirmed the Philippine government’s commitment on the AWPR to advance the WPS agenda in the country.

“We remain committed in ensuring that the Philippine National Action Plan (PNAP) is fully and adequately implemented particularly in the conflict affected zones in keeping with our core belief that the meaningful participation of women in various levels of governance, leadership, and in program formulation and implementation is instrumental in transforming the vulnerable sector to become valuable and viable instruments of conflict transformation,” Andot said.

The symposium also identified action plans for ASEAN as well as the respective ASEAN Member States to effectively implement the Joint Statement on WPS.

These included strategies to be employed for the protection of women as well as programs and activities that will strengthen and promote the interests and welfare of women and vulnerable sectors in situations of conflict.

One of the main commitments of the Joint Statement was to continue addressing the root causes of armed conflicts such as poverty, discrimination, gender inequality, social injustice, economic, and social exclusion of persons and communities vulnerable to and at risk of radicalization, violent extremism, and terrorism.

In the Philippine setting, the PNAPWPS contributed to the expansion of women’s role in the peace process, conflict transformation, and protection of their human rights in conflict situations.

These were operationalized during the Marawi City siege last year which brought about the meaningful participation of women in different ways such as the formation and deployment of joint female members of the Armed Forces of the Philippines and the Philippine National Police known as the Hijab Troopers, the conduct of regular dialogues and town hall meetings from women in Marawi communities and civil society organizations, and the establishment of Women Friendly Spaces and Women Children Protection Desks.

“It takes intensive networking and coordination to leverage the role of international development partners and recognize their critical contribution to advancing the WPS agenda. On this aspect, we need to improve some more and strengthen our collaboration, monitoring and evaluation,” Andot said.

The event was organized by the ASEAN through its Institute for Peace and Reconciliation, in partnership with OPAPP, Ateneo de Manila University, and the Norwegian Ministry of Foreign Affairs.

In relation with this, Amina Rasul, president and founder of the Philippine Center for Islam and Democracy (PCID), was chose one of the three Philippine resource persons for the AWPR.

The other two were former OPAPP head Teresita Deles and Undersecretary Gloria Jumamil-Mercado.

Meanwhile, the PCID has welcomed the appointment of former Armed Forces of the Philippines (AFP) chief of staff General Carlito G. Galvez, Jr. as the head of OPAPP, or the as the presidential adviser peace adviser on the peace process.