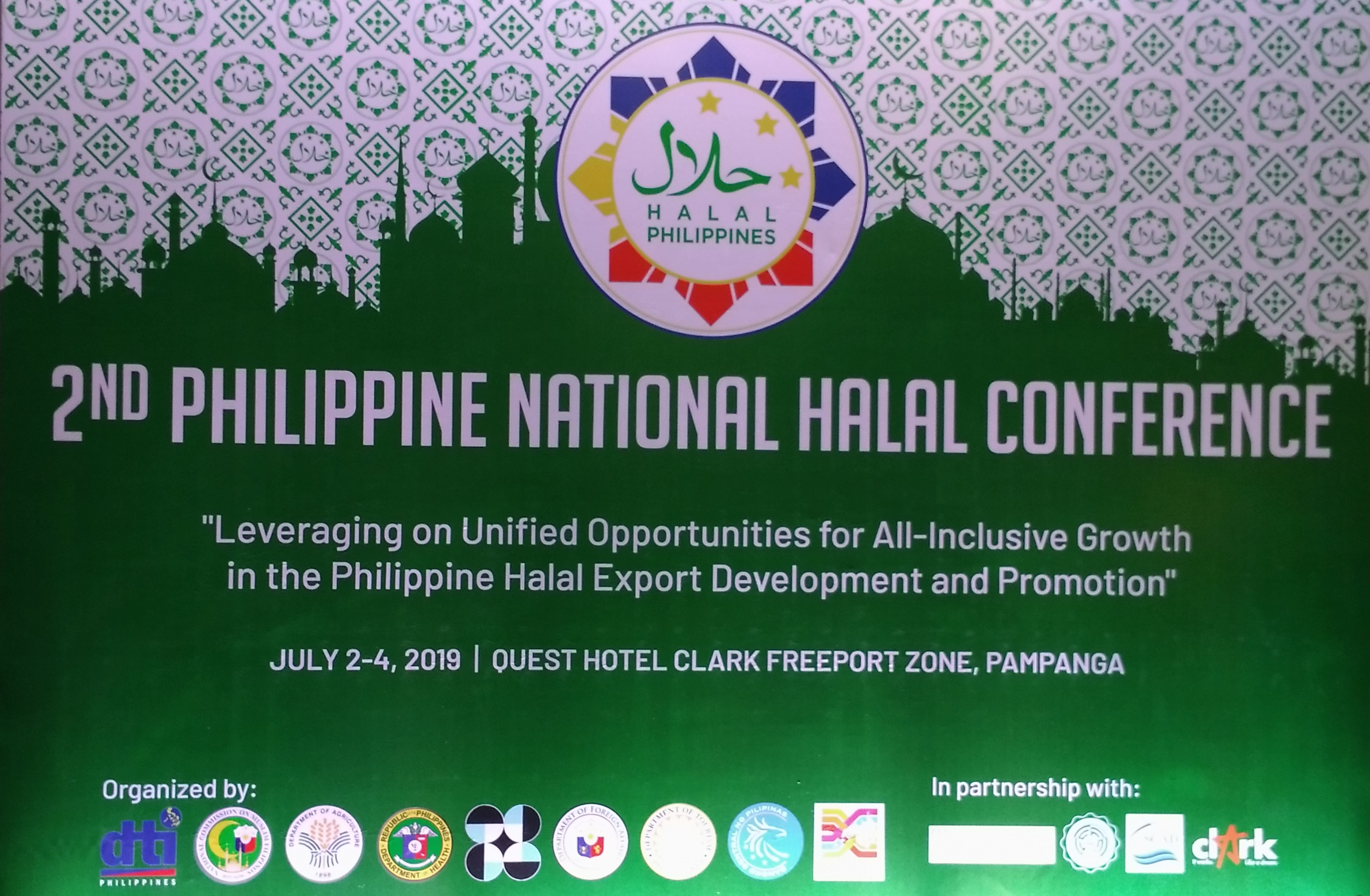 — It is not a mere label. It is a way of life, from eating to drinking, clothing and talking, and traveling, etc.

— It signifies being healthy, hygienic and pure, as well as organic.

— It is environment-friendly as it does not promote any hazards to the environment such as the use of chemicals.

CLARK FREEPORT ZONE in Pampanga (SDN) — The Department of Trade and Industry (DTI) expects a big surge in the demand for halal cuisine during the Southeast Asian (SEA) Games 2019.

The Philippines will be hosting the 30th edition of the SEA Games to be held on November 30 to December 11, with athletes coming from member-countries of the Association of Southeast Asian Nations (ASEAN), now numbering 11.

Events of the SEA Games will be held at New Clark City in Tarlac City, Region III, Central Luzon, and in Metro Manila.

He said it can also be expected that many citizens from the three Muslim countries will visit the Philippines to witness the performance of their countrymen.

This gives the country and Filipinos an opportunity to show their best foot forward and provide the visitors a taste of Filipino hospitality, including offering halal food for the Muslim visitors.

“Around 48,000 athletes and spectators are expected to come for the Philippine Games 2019,” Macatoman told SDN — Science and Digital News in an interview at the sidelines of the DTI-organized 2nd Philippine National Halal Conference (PNHC) — July 2 to 4 — here at Quest Hotel and Convention Center, the former Holiday Inn Hotel.

The DTI official from Mindanao said the SEA Games is the reason the Halal Conference is being held in Region III, particularly at the Clark Freeport Zone.

He recalled the 1st PNHC was conducted in Davao City in Region XI in Mindanao during which “we presented our National Halal Strategic Plan.”

Here at the 2nd PNHC, Macatoman said, “now we presented our National Certification Scheme that will be used by Halal Certifying Bodies (HCBs), and the DTI-created Unified Halal Logo.”

“This (halal logo) is very important so that HCBs will not be using their own logo like before. Now, we have one halal logo that manufacturers, suppliers, and HCBs can use,” the DTI official said in the interview.

On the other hand, Macatoman said the National Certification Scheme will be the only one the Philippine Accreditation Board (PAB) of the DTI will use for HCBs’ adoption.

Regarding DTI’s promotion and push of the country’s halal trade, he said that some manufacturers and suppliers of food products have been convinced to have their products go through the process of halal certification.

“They now understand that if their products are certified halal,” he added, “their market reach will expand. Now, they have a very positive response as the DTI ‘Negosyo Centers’ are in the front line in the promotion of halal trade.”

He said DTI has over 1,000 Negosyo Centers scattered across the country which make it easier to explain the concept of halal.

Prof. Ali Laguindab at the podium discusses setting up a group to tackle halal-related issues as it relates to Shari’ah Law in line with Republic Act 10817. (Photo: SDN)

“Halal” is an Arabic word which means permissible or allowable. To determine a product to be halal (now non-food products such as cosmetics and pharmaceuticals are also being made Muslim-friendly), it must undergo a scientific process like stringent laboratory tests to determine whether it contains un-Islamic substances/elements which are “haram” (not permissible), among them, pork and alcohol and their derivatives.

Islam prohibits Muslims from consuming haram foods for reason of health and hygiene.

It is very special the halal conference is being held at Clark Freeport Zone, Macatoman pointed out.

“We hold this here in preparation for the Southeast Asian Games from November to December because we are preparing them. If they are not fully halal compliant, at least Region III can be a Muslim-friendly destination, specially here at Clark Field and Subic Freeport (in Olongapo, Zambales).”

“So, we are preparing the hotels, restaurants and other establishments. And now the response is very positive. They now understand what halal is.”

Macatoman said the halal conference is in line with Republic Act 10817, the Philippine Export and Promotion Act of 2017.

“In sum, halal is here. It is adapting to our changing world of globalization, and it is for everyone. Our concerted efforts have become springboard in boosting the halal trade economy of the country, and contribute to the government’s program in promoting the Philippines as a viable halal producer,” he said in his Welcome Remarks at the conference’s opening.

In his presentation, Macatoman noted the growth of the global halal market.

He said the Global Islamic Economy (GIE) reported in 2017 that halal food is one of the leading sectors across the world.