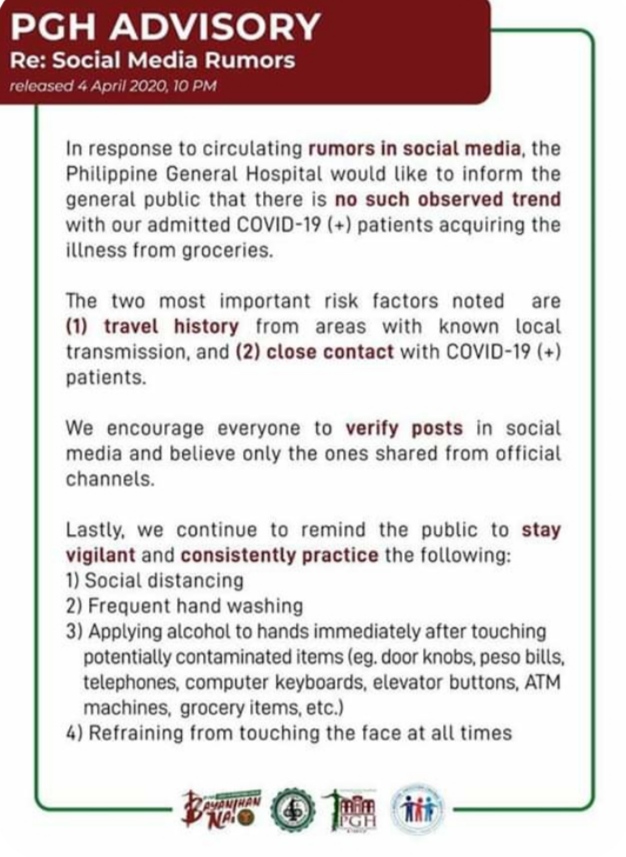 (SDN) — GROCERY items have not been found as sources of infections of the Covid-19 virus.

The Philippine General Hospital (PGH) has made this clarification to stop what it described as “rumors” that came out online last week.

“In response to circulating rumors in social media, the Philippine General Hospital would like to inform the general public that there is no such observed trend with our admitted Covid-19 (+) patients acquiring the illness from groceries,” the PGH clarified through an advisory.

It emphasized that “travel history made in areas known with local transmission and close contact with Covid-19 (+) patients” are the “two most important risk factors” observed.

The PGH issued the advisory on April 4.

It also urged the public to be discriminating when sharing information.

“We encourage everyone to verify posts in social media and believe only the ones shared from official channels,” the state-funded medical institution said after receiving messages asking for clarification on the rumors.

In a related issue, an official of the Department of Health (DOH), Undersecretary Maria Rosario Vergeire, did not rule out grocery items could be sources of the coronavirus transmission, per a report in http://www.interaksyon.com written by Jeline Malasig. Her source was ABS-CBN News platform.

In her report, citing ABS-CBN News, she said the DOH official acknowledged the possibility of the human-to-groceries-to-human transmission.

(Translation: For these past days, many of our patients were saying they only went to the grocery, so that’s possible because when a virus comes out from you it could land in surfaces.)

(Translation: It’s posssible they went, for example, to the canned goods section which we buy and we brought home, so what we have always been saying, wash your hands thoroughly.)

When he proclaimed the ECQ because of the spread and transmission of the coronavirus the target ending was April 13. He declared the ECQ on March 16.

Secretary to the Cabinet Karlo Alexei Nograles announced the extension, saying the President approved the recommendation of the Inter-Agency Task Force on Emerging Infectious Diseases (IATF-EID).

As this developed, the DOH in its Case Bulletin #023 issued at 4 p.m. on April 4, added 414 new confirmed cases to the Philippine tally, bringing the national total to 3,660.

For good news, there are nine patients who recovered as well, with the overall sum rising to 73.

Covid-19 deaths in the country have reached 163, the health department said.

The National Task Force (NTF) against Covid-19 under Chief Implementer Secretary Carlito G. Galvez, Jr., as of April 6, said 20,092 individuals have been tested for the 2019-novel coronavirus; there are 106,621 test kits on hand; 3,303 bed capacity for Covid-19 patients in mass quarantine facilities.