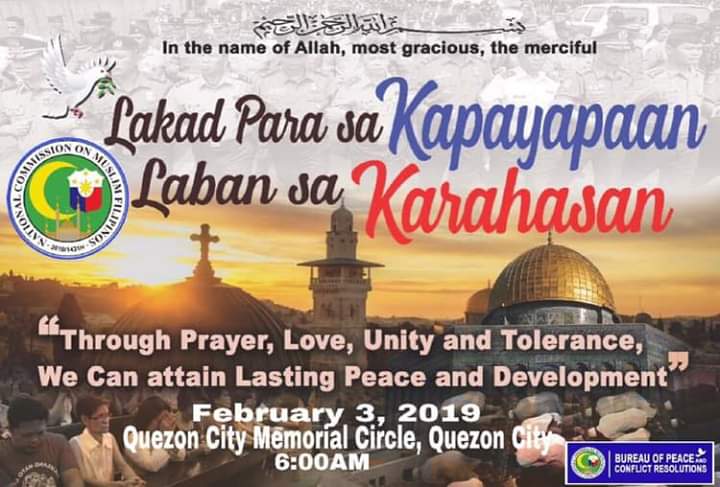 VARIOUS groups of Muslims and Christians will show their solidarity and oneness with the people of Sulu and Zamboanga City, today, February 3, through a unity walk at the Quezon City Memorial Circle, Metro Manila.

SDN — Science and Digital News learned that the NCMF under the leadership of Secretary and CEO Saidamen Balt Pangarungan the unity walk is one of the many responses of the commission to the terrorist attacks in Jolo, Sulu, and the grenade attack in Zamboanga City.

Twin bombings hit the Our Lady of Mount Carmel in Jolo on January 27 that killed 22 worshipers and injured around 100 faithful. The grenade attack on Masjid Kamahardikaan in Logoy, Talon Talon, Zamboanga City, killed two sleeping Muslim religious workers (da’e/Tableegh) and injured some of their companions.

NCMF Secretary & CEO Saidamen B. Pangarungan (left) and NCMF Executive Director Tahir S. Lidasan, Jr. at the NCMF press conference on Friday, February 1. The NCMF described the bombings of a cathedral in Sulu as act of cowardice and terror. (Image: EKU)

In condemning the attacks, Pangarungan said at the NCMF press conference on Friday, February 1, that neither Christianity nor Islam condones acts that cause harm and death.

The NCMF leader said the lives of Muslims and Christians are connected in more ways than one.

“We all have a Muslim and Christian in our lives, be it a neighbor, a friend, or a loved one.

“Let us remember this: if we allow the thoughts of hatred and discrimination pervade our minds, then we allow the terrorists to further drive a wedge between us Filipinos,” Pangarungan emphasized.

Despicable, barbaric, and un-Islamic Pangarungan labeled the terrorist attacks in the two areas.

To help prevent Filipinos from being carried away by the twisted message of violent extremists (read: terrorists), the NCMF has launched a United Nations Development Programme (UNDP) and Japan-supported nationwide campaign titled “Strengthening National and Local Resilience to Risks of Violent Extremism in the Philippines” last week in Marawi City.

Dr. Dimapuno Alonto Datu Ramos, Jr., director of the Bureau of External Relations (NCMF-BER), said the campaign will also be brought to Cotabato City, Zamboanga City, Cebu City, and the National Capital Region (NCR), and North and South Luzon aimed at spreading the message against violent extremism among the Muslim Filipino youth as well as teach and ingrain in their hearts and minds love for country.

He said the unity walk being organized by the Bureau of Peace and Conflict Resolution (NCMF-BPCR) headed by Acting Director Cosainie Derongonan will have groups coming from their respective assembly points from the University Avenue, University of the Philippines Diliman (UPD) for the Muslims and PLDT area, East Avenue for the Christians.

Datu Ramos said the groups will then walk to the QCMC where they will converge around 6 a.m.

The activity will conclude with an interfaith rally and signing of a Peace Covenant, he added.

In line with the solidarity activity, the NCMF-BER chief, who is also the commission’s media head, said Pangarungan enjoined all employees, commissioners, and bureau and regional directors to show up and participate as the “NCMF’s pledge for peace in our country as concerned citizens.”

Datu Ramos said in staging the unity walk, the commission was acting on a strong cry from “both Muslims and non-Muslims in the Philippines that we should always stand together during times of adversity, and that religion will never be a reason for divisive actions.”

He added: “We must always work hand-in-hand because we are all Filipinos trying to protect our country and its citizens, and this interfaith activity ordered by Secretary Pangarungan and diligently carried by BPCR Director Derongonan.”

He said that looking beyond the attacks’ “implied connection with the BOL (Bangsamoro Organic Law) ratification done by media outlets, and the endless statements on social media by thousands of internet users, what we must remember is that any act of violence against one citizen of the State is an act of violence against the whole nation, regardless of religion and political affiliation.”

Pangarungan said he and the NCMF are one with the nation in mourning for those who perished from the attacks.

NCMF Executive Director Tahir S. Lidasan, Jr. read before members of the media a one-page statement in solidarity with the people Sulu and Zamboanga City as well as condemning to the highest degree the terrorists’ acts of mayhem and violence. (EKU)