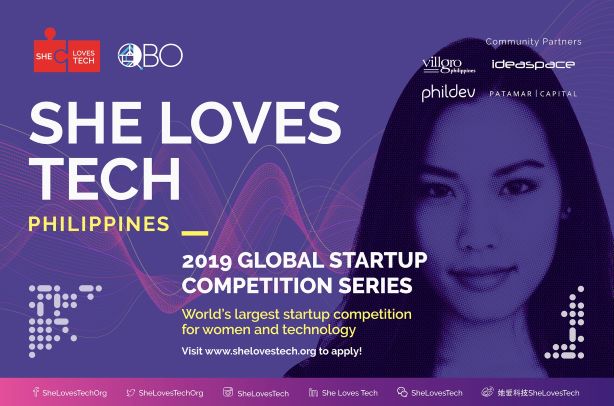 “Our goal is to provide a platform for international tech companies, investors, entrepreneurs, startups and consumers together, to promote technology for women and technology by women.”

AN all women-powered startup dubbed VESL has sailed past its eight rivals at the She Loves Tech Philippines 2019 pitching competition.

In doing so, the fintech startup emerged the Grand Prize winner, sweetened the more by an all expense-paid trip to Bejing, China, for the competition’s global edition.

In winning the competition, VESL will then move on to the world stage of She Loves Tech and participate in a bootcamp attended by some of Asia’s top unicorns (startups with valuation of US$1 billion).

It will also be able to get a chance to vie to become the competition’s global winner.

Team VESL, an all women-powered startup, is off to Beijing, China, for She Loves Tech 2019 global competition. (Photo: QBO Philippines)

QBO Philippines said the startup’s victory also gave them the opportunity to scale their platform across Southeast Asia to the tune of US$15,000 activate package from Amazon Web Services (AWS).

The women behind the winning startup also got copies of The Finishers from Ambidextr, and media values from tech-focused publication called SpartUp.

They got the nod from the Board of Judges of the event staged on August 3 at the QBO Philippines headquarters at Department of Trade and Industry (DTI) International Building, Makati City, gave the nod to VESL, apparently after seeing VESL’s potentials to grow bigger.

At the helm of the company is an all-women founding team comprised of Maureen Nova Ledesma, Jessica Manipon, and Yroen Guaya Melgar.

Startupbootcamp in Fintech in 2017 accelerated VESL, which “aims to boost economic development in Southeast Asia through a platform trade lenders and businesses to per invoice trade credit insurers.”

“This win is very encouraging for VESL to keep faith and stay on-course. However, we know that is just one step towards our goals and that real victory is measured by our impact to the society.

“We go full speed ahead towards closing the trade finance gap! It’s a bonus to be recognized,” she said. Her group focuses on trade finance.

Ledesma’s team beat eight founders, each of them showcasing their startups to get the judges’ nod. QBO Philippines and She Loves Tech hosted the competition for the country’s top female founders.

Aside from being the Grand Prize winner, VESL, as well as 1Export, and StyleGenie received the SparkUp’s Bayanihan Ecosystem Award.

Here’s what it means to win the Bayanihan Ecosystem Award:

“The Bayanihan Award reinforces our team to work harder in serving both online shoppers and MSME (micro, small and medium enterprise) retail brands through our platform,” said StyleGenie Co-founder and COO Abbie Victorino.

The Board of Judges and the audience at the competition. (Photo: QBO Philippines)

“We are grateful for the Startup Bayanihan Ecosystem Award because it validates the work that we currently do for MSMEs in the country.

“We believe that we will still need to learn and do so much for Philippine exports, and this award gives us a platform to show that we can do to contribute.”

More than US$70 million in funding

A packed audience with many tech and ecosystem leaders, among them fellow founders, investors, community builders, members of the news media, students, and stakeholders witnessed the competition.

Founded in 2015, She Loves Tech is touted as currently the largest startup competition that promotes both technology for women and technology by women.

It has already featured more than 1,000 startups from around the world during is four years of existence.

The over 1,000 startups went on to collectively raise more than US$70 million coming from top VC firms like Sequoia Capital and Wavemaker and top tech companies like Microsoft and Amazon.

Benefits from the competition included improved visibility of female tech founders across the world, as they received over 1,200 media features, a live audience of more than one million people, and over 500 million media impressions.

She Loves Tech Philippines 2019 was no different. At QBO Philippines, the venue as in last year’s, the very best of female-led founders in the nation, including those at the helm of FHMoms, Antipara Exploration, Inc., Payo, StyleGenie, 1Export, Goally, Container Living PH, SmartBride, and VESL took turns pitching their respective companies.

The 2018 edition of the competition had another fintech startup winner — Olivia.ph, which Jocelyn Pantastico founded.

It is a global initiative that showcases the convergence of the latest trends in technology, entrepreneurship, innovation and the opportunities they create for women.