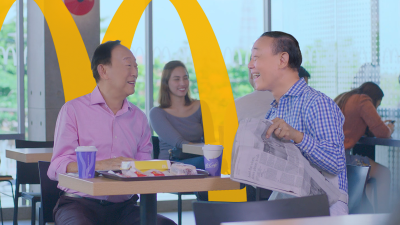 MUSIC Icon Jose Mari Chan has teamed with the the chairman and founder of McDonald’s Philippines.

Their partnership is highlighted by a heartwarming video which reminds people that one is never too old to live their dreams.

There is no time limit to dreaming. After all, age is just a number, and it is never too late to explore new opportunities or chase new dreams.

That is the message that McDonald’s reminds everyone in its latest online video featuring the Filipino music icon McDonald’s Philippines chairman and founder.

Set to the duo’s collaborative duet of Chan’s “Can We Just Stop and Talk Awhile”, which he made popular in the 1970s, the film shows the two men exchanging roles for a day. Each one gets a glimpse into the day in the life of the other, as we see the musician experiencing the fulfillment behind running McDonald’s and bringing smiles to his customers’ and employees’ faces.

Dr. Yang, on the other hand, a classical musician himself, gets to warm up his vocal chords as he spends the day rehearsing for a concert.

In the end, they find themselves back in the comforts of a warm McDonald’s meal shared with a friend, and in the reality that they both were able to live out their dreams in their own way.

Released in time for Grandparents’ Day, the video serves as a tribute to grandparents everywhere — a testament to making every moment count.

Be inspired by the story of hard work and friendship of Chan and Dr. Yang, and
watch the video here https://youtu.be/KqxgkMjhjxI. @