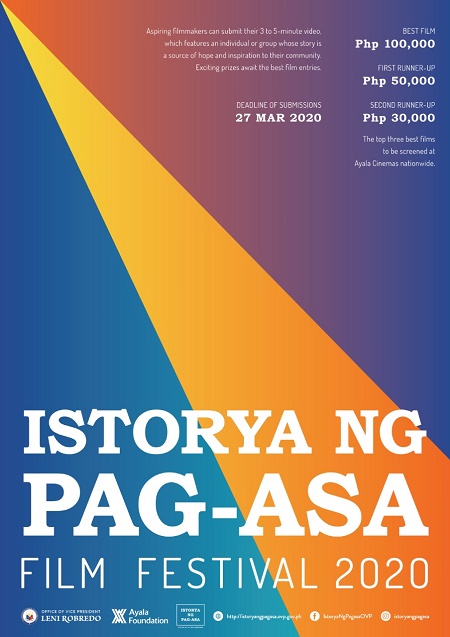 (SDN) — ORDINARY Filipinos and their inspiring stories of triumphs amidst a gauntlet of adversities will be back in 2020.

The Office of the Vice President (OVP) in collaboration with the Ayala Foundation, Inc. (AFI) has been organizing the short film competition.

She said the the IPFF is a venue both for established and aspiring Filipino filmmakers to give life to Filipinos’ stories that hopefully will spark hope and inspiration in their countrymen about going for dreams despite their vulnerabilities.

That’s what sold the AFI into the IPFFt. “We believe so much in the concept, it is not a monopoly, it is apolitical, no mixture of political (message), the AFI said at the event.

The OVP has embraced the competition, saying the issues tackled in some of the entries, particularly the winning entries, have become “our advocacies,” referring to the struggles of former IPFF subjects’ battle against drug addiction, mental health issues, and others.

A nationwide all-digital competition, the 2020 edition is its third and it will mark bigger prizes, the Vice President, who gamely (without a tinge of superiority air) fielded questions from reporters.

The competition seeks to lure a broader number of participants and entries “which bring to the screen everyday tales of ordinary Filipinos achieving extraordinary victories through perseverance, determination, and unquenchable hope.”

Organizers of the filmmaking competition intends to surpass fully the success of its first two editions.

Why no cash prize for subjects/story owners

Other prizes are for Best Director, Best Cinematography, Best Editing, People’s Choice Award, AFI Community Development Award, and OVP Special Recognition Award. Each winner (as well as the Top 10 Finalists) will receive a cash prize and trophy as well.

Meanwhile, some reporters raised the issue of whether the subjects from which the stories came from had received any cash prize.

Apparently, the media’s concern was that the subjects and their stories of triumphs provide the meat, the substance to the filmmakers from which to work on to deliver a message, and inspire others.

Some suggested that least the subjects of the winning films would also earned from the rights to their stories.

Robredo acknowledged that they had discussed this issue but meantime the prizes are for the filmmakers. The prizes come from the AFI, which had bought in the goals of the competition.

One of IPFF films’ subject spoke at the event launch at Ayala North Exchange, Al Quizon, former drug addict, who agreed to have his story told through the competition.

He detailed the difficulties of a drug addict, including their rehabilitation. Quizon said that “out of 100 (rehab) patients only one percent becomes sober, ‘gumagaling’ (recovering).”

“That I am capable of helping (other drug addicts) recover (from their addiction.”

Robredo said Quizon was a drug addict for 20 years but he was able to come back. “He is one of the people that inspired us.”

RJ Baculon, whose entry about a Filipino (who happens to be his friend) in Melbourne, Australia, who is fighting depression because of mental health issues, won in the IPFF.

He said the Filipino-Australian’s story — he fights depression through break-dancing and teaching the kids — draws lessons for others.

The Vice President said that because of the films’ subjects on drug addiction and getting back into one’s life and the mental health issues, her office plans to do special editions of IPFF on the two issues.

“We will launch soon a special edition about drug users who defeated their addiction and came back.”

“For the audience (who have no problems like the subjects) who see the (IPFF) movies might realize that ‘we have no right complaining about life.'”

The Vice President said the films like the one on mental health showed that it is a problem. “That is OK to seek help. It is not something that we should be ashamed about.”

Those interested to participate in the competition have until March 27, 2020, to submit their entries to the OVP which were saved on a USB.

Non-professional and professional filmmakers are welcomed. Videos which must be original should be from three to five minutes length (website: http://www.istoryangpagasa.ovp.gov.ph).

The Board of Judges will determine the winners based on Concept and Story, 40%; Presentation of the Theme (Hope), 20%; Quality of Production, 20%; Reach and Impact, 10%; and Overall Experience, 10%. (SDN)