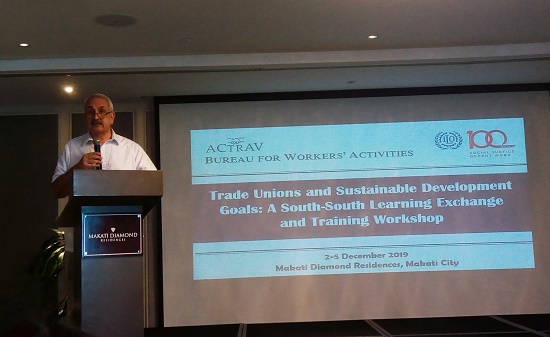 He told SDN — Science and Digital News the projects are for water supply worth US$2.6 million (around Php135.8 million) and another for child labor to the tune of $1.5 million (some Php78 million). Both are funded by Japan, he added.

The ILO-Manila official spoke at the “Trade Unions and Sustainable Development Goals: A South-South Learning Experience and Training Workshop” which the United Nations agency organized at Makati Diamond Residences, Makati City, Metro Manila, on December 2 to 5.

He said part of the water supply project is a $500,000 to $600,000 water desalination plant for the Bangsamoro Autonomous Region in Muslim Mindanao (BARMM).

Hassan said the projects are being carried out in various areas or sites under the jurisdiction of the newly-created BARMM.

For many years different administrations of the 22-year-old ARMM had relied on the international community for assistance to help it on its feet. This beggar-like situation is not expected to change under the BARMM.

Apparently, the two ILO-Japan projects came just in time for the new political entity (NPE) in Mindanao, which sprung from out of the more than 40 years internecine war in Mindanao that killed more 120,000 government troopers, Moro rebels, civilians and other non-combatants and destroyed multi-million pesos worth of agricultural resources, infrastructures, houses, etc.

“We are implementing a water project which is funded by Japan. It is a $2.6 million project. The project is aiming to improve water supply in 22 areas. We will be doing (the programs on water supply) in Cotabato down to Tawi-Tawi,” Hassan said.

The ILO-Manila official said he was excited to learn that one of the sites for the water supply initiative is a community that has a school with 1,400 children studying, but water is not available to them.

“This project will provide them water. The water will come from six kilometers down to the community, and then we will be establishing various collection spots.

“So, I am very excited with this project because the children will be getting the water and will improve their health, and their (well-being),” Hassan emphasized obviously with much pride.

BARMM is comprised of the former territories of ARMM, such as the provinces of Basilan, Lanao del Sur, Maguindanao, Sulu, and Tawi-Tawi and the cities of Marawi and Lamitan.

Additionally, Cotabato City and 63 barangays (villages) in six North Cotabato municipalities have joined the BARMM after the plebiscite on January 21 and February 6, 2019 (MindaNews.com).

Also part of the project on water supply is on the collection of rain water, how to collect water from rain, bottle it and how to make it last longer, he  said, indicating that ILO-Manila is aware that some areas of BARMM provinces rely mainly on rain water for their water supply.

“We are also working on rain water, how to collect it into bottles and how to keep it for a longer time, and how to distribute them better. So, this is what we are aiming to.

“We are doing it from Cotabato down to Tawi-Tawi, 22 various supply schemes, but Tawi-Tawi will have a desalination plant,” said Hassan.

“We are aiming to establish a water desalination plant in Tawi-Tawi; meaning we will get water from the sea and clean it and then it will be usable for drinking. So, we are working on that.”

Hassan said they are also into thinking of turning the salt that will be produced from the sea water for possible livelihood, for electricity, and other uses. “Thus, there will be some businesses to be spawned by the desalination plant for Tawi-Tawi residents.”

Along with the water supply project, the ILO-Manila official said they are also implementing a child labor program also in the BARMM, another Japan-funded project at $1.5 million.

Hassan said ILO will train teachers and the communities on child labor issues, as well as establish businesses for the mothers of the affected children.

Hassan said ILO-Manila expects to complete the water supply project by December 2020, while the child labor program is a three-year undertaking. (SDN)