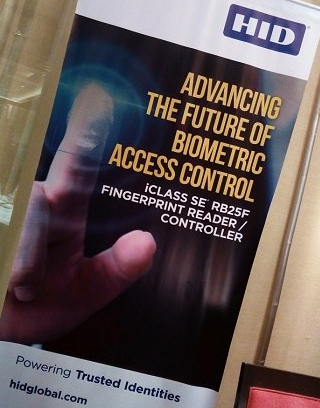 (SDN) — HID Global is promoting in the Philippines the use of fingerprint reader for secure biometrics access control.

For this, the company introduced to Filipinos its HID iClass SE Fingerprint Reader RB25F.

It can be recalled that HID Global rolled out and introduced to the world the new fingerprint reader in April 2019.

With its launch, HID Global literally brought fingerprint reader to the door.

On November 26, officials of the tech company unveiled the biometric product in the Philippines as they briefed members of the media in Makati City, Metro Manila.

Not the usual fingerprint security, they assured, saying their hardware and software goes deep into one’s finger to provide security that can’t be fooled.

It’s for being “reliable, secure, convenience, and robust,” he himself answered as he presented their company’s system, headlined by the HID iClass SE Fingerprint Reader RB25F.

Some most common biometrics technologies being used for identity authentication include fingerprint, face recognition, iris, palm, and DNA-based recognition. There are others being developed one of them using the ears.

But as for HID Global it is easy to see their preferred technique is fingerprint recognition.

Through the use of biometric techniques a person can be identified and authenticated based on a set of recognizable and verifiable data, which are unique and specific to the person, say using his/her fingerprint.

HID Global is positioning itself to be able to “power the trusted identities of the world’s people, places and things.”

Fung said the Philippines in the first country in Southeast Asia they introduced the new fingerprint reader.

“We got it already in Thailand,” said Fung.

The HID Global executives assured that their fingerprint reader can detect the “liveness” of a finger, that is whether it’s from a living person, or a fraud using silicon to mimic a person’s fingerprint.

The fingerprint reader illuminates users’ finger and penetrates deeper, not just reading the  surface tissue. It can find match in less than a second, they claimed.

It is equipped with a built-in optical tamper protection, supports the Open Supervised Device Protocol (OSDP), including HID’s Seos technology for multi-layered authentication between the reader and credentials. (SDN)