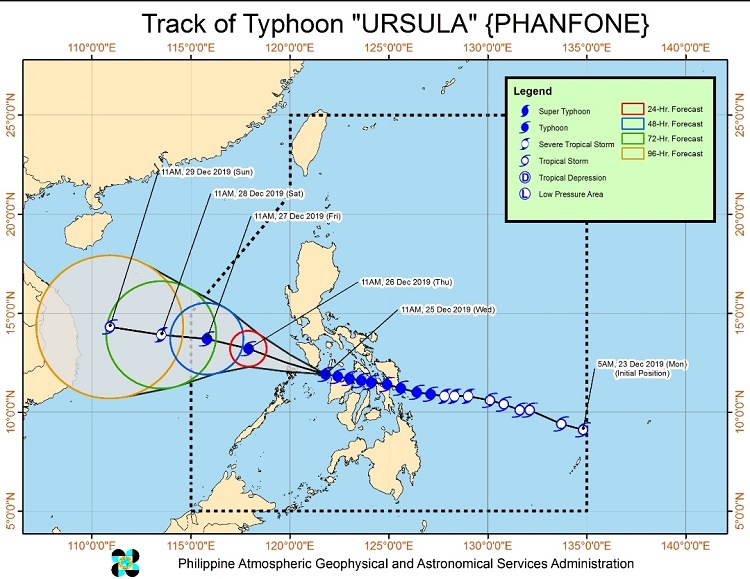 At 2 p.m. on Christmas day today, the Department of Science and Technology issued its Severe Weather Bulletin #18 as government weathermen continued to track  and monitor the paths of Ursula.

DOST’s weather agency, the Philippine Atmospheric, Geophysical and Astronomical Services Administration (DOST-PAGASA), issued the bulletin which it said is valid for broadcast until a new one issued at 5 p.m. the same day.

PAGASA headed by Administration Dr. Vicente B. Malano revealed that the latest typhoon to hit the Philippines, which receives an average of 20 typhoons annually, has maintained its strength while moving to the Mindoro provinces’ southern portion.

It added that the Mindoro provinces’ southern portion will be affected by the eyewall in the next hours.

“In case of the passage of the eye in some of the aforementioned areas, calm conditions will be experienced. However, as soon as as the eye moves out of the area, violent conditions associated with the eyewall will resume,” PAGASA warned.

Here’s the rest of the No. 8th bulletin:

The state weather agency said the location of the typhoon’s eye or center at 1 p.m. was tracked 70 km southeast of San Jose, Occidental Mindoro, using all available data including the Busuanga Doppler Radar.

It’s moving west at 20 kilometers per hour (kph). It has a maximum sustained winds of 140 kph near the center and gustiness of up to 195 kph.