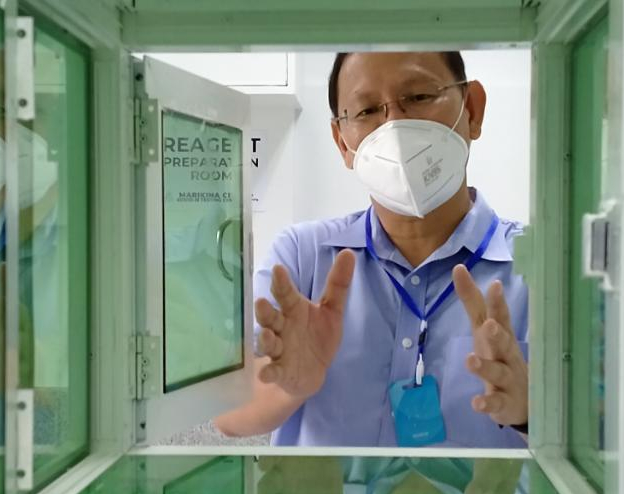 And to fulfill his avowed mission to help his constituents fight and defeat the dreaded CoronaVirus Disease 2019 (Covid-19), he is establishing the city’s own testing facility for Covid-19.

He said the city has 200 PUMs (people under monitoring).

He already nearly month ago completed a facility housed at the 6th floor of the City Health Office (CHO). It was then ready to accept residents who needed to be tested for the virus causing the infection, SARS-CoV-2.

It was not to be. The Department of Health (DOH) thumbed it down.

Reason: a testing center must be in a building of its own to prevent the spread and transmission of the virus.

The mayor accepted the DOH verdict. But he was not to be denied from fulfilling his mission. Not even a gauntlet of obstacles can dampened his spirit.

One may wish Mayor Teodoro’s constancy of purpose will infect (no pun intended) executives of other local government units (LGUs). Not a far-fetched idea, for sure.

And it came to be that he searched his turf for a new location on March 30 for a building as the exclusive domain of the Marikina Covid-19 Testing Center.

He found it. It’s on another part of the city but easily accessible. It’s a two-storey structure occupying a 160-square meter lot in Bayan-Bayanan Avenue, Barangay (Village) Concepcion Uno.

Teodoro said then of the location. “This is a free-standing structure…along a main avenue in Marikina…has no other offices, no other clinic.”

It seems the descriptions fit to a T what the DOH recommended. All’s well that ends well. Hopefully.

You can’t put a good man down. People are wont to say.

So, by Friday, April 17, the Marikina City chief executive has scheduled the opening of the testing facility. With or without a License to Operate (LTO) from the DOH, it was learned.

He has a “weapon” with him.

“Marikina is now invoking its local autonomy. This is in the mandate of every local government unit.”

A statement from the city’s media office said he will push the facility’s opening and invoke the autonomy of LGUs and the General Welfare Clause during public health emergency.

“Marikina is now invoking its local autonomy. This is in the mandate of every local government unit,” Mayor Teodoro emphasizes in Pilipino and English.

For sure he does not relish doing time, but he is preferred for any eventuality.

(Translation: They can sue me in the name of my town mates. In my view, it’s a bigger sin in the eyes of the law and the people the lack of action from the DOH today because lives are being lost.)

His stand, which he cited, is anchored on Section 16 of the Local Government Code that says “every local government unit shall exercise the powers necessary, and appropriate in the promotion of general welfare and health of the public.”

The mayor added that this is also pursuant to Presidential Proclamation No. 922 which declared a State of Public Emergency in the country and enjoins all LGUs to mobilize the necessary resources to undertake critical, urgent, and appropriate response and measures in a timely manner to curtail and eliminate the threat of Covid-19.

Teodoro said the city’s testing center will start providing tests on April 17, which will be open to residents of neighboring areas.

“We expect that with the opening of the Marikina Testing Center on Friday more will avail themselves here at our Marikina Covid-19 Testing Center. This is our strategy to fight Covid-19. We will conduct mass testing,” he says.

To carry out the mass testing, the mayor has ordered 3,000 Test Kits from Manila HealthTek, Inc., and has ordered another set of 3,000 more.

(One test kit my contain from 1,000 to 2,000 tests per Dr. Raul V. Destura, a scientist from the National Research Council of the Philippines of the Department of Science and Technology (DOST-NRCP). He and a team from University of the Philippines Manila National Institute for Health UPM-NIH), developed the detection kit. It was already approved for use by the Food and Drug Administration.)

Mayor Teodoro is counting on the reliability of the Filipino-developed Test Kit for Covid-19. (SDN)