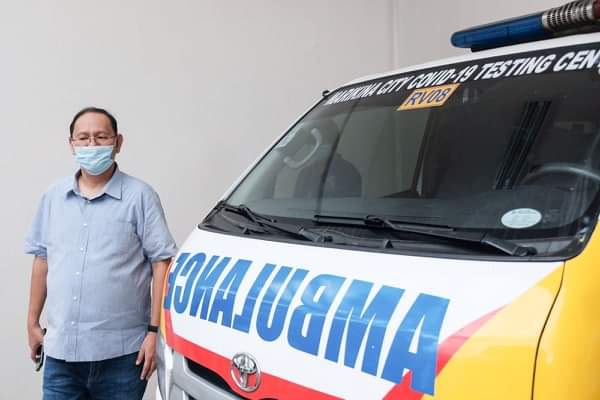 Even with the Department of Health (DOH) not approving the city government’s planned Covid-19 Testing Center, he will still pursue it.

Apparently, what emboldens the city chief executive is the urgent need to address his constituents safety and security from the SARS-CoV-2, the virus that caused three-month long (and counting) pandemic now slashing through 201 countries.

Good thing is that the DOH recommended to city government having the testing facility outside the City Health Office for the protection of the mayor’s staff and have less foot traffic to prevent cross-infection.

The mayor, to emphasize, is obviously determined and committed, undaunted by the location-related obstacle, and is bent on having a Covid-19 laboratory on a new building so he can address the needs of his constituents for testing from the virus.

A report on GMA7’s “24 Oras” evening newscast showed Teodoro inspecting a site for the new building that will house the center.

Came the DOH disapproval. But it was not the demise of the plan.

On Monday, March 30, he inspected and presented the new site of the Marikina Covid-19 Testing Center, a two-storey building, “a free-standing structure…located in a not populated (area) but accessible” being on a main avenue.

The mayor said through press statement the location jives with what the DOH required for the testing facility to be in a separate building.

His building for the facility will stand on a 160-square meter lot in Bayan-Bayanan Avenue, in the city’s Barangay (Village) Concepcion Uno.

“This one is a free-standing structure, the area is not populated. It is located along a main avenue in Marikina. In terms of location, this looks like suitable to what they suggested,” said Teodoro in Pilipino and English, referring to the DOH.

“It has no other offices, no other clinic. It only has the laboratory. So, the only people you will see here are the pathologists, medical technicians, and lab technicians.”

Constructing the new building is targeted to be finished in two weeks, said Kennedy Sueno, head of the City Engineer’s Office (CEO).

(We need to test our town mates if they have Covid-19 infection so they can get treatment, isolate them and contained and not infect their loved ones.)

Much earlier, Teodoro revealed his plans to buy

The mayor assured the safety of his constituents concerning the lab facility for Covid-19 testing because the city government followed the risk assessment template as well as strictly implemented the protocol of biohazard measures.

As well as strictly adhering to the risk assessments and protocols, Teodoro said the facility will also have trained personnel, will follow the work process and the layout of the laboratory faithful to the requirements for biohazard safety.

He said the Marikina Covid-19 Testing Center will have its own exclusive ambulance on standby.

(We need to test our town mates if they have Covid-19 infection so they can get treatment, isolate them and contained and not infect their loved ones.)

Much earlier, Teodoro revealed his plans to buy 3,000 diagnostic tests to be manufactured by Filipino scientists from the University of the Philippines Manila (UPM) through the funding support of the Department of Science and Technology’s Philippine Council for Health Research and Development (DOST-PCHRD).

The diagnostic test is still under field testing.

According to the DOH Covid-19 tracking website, Marikina City has as of March 30 a total of 11 confirmed cases.