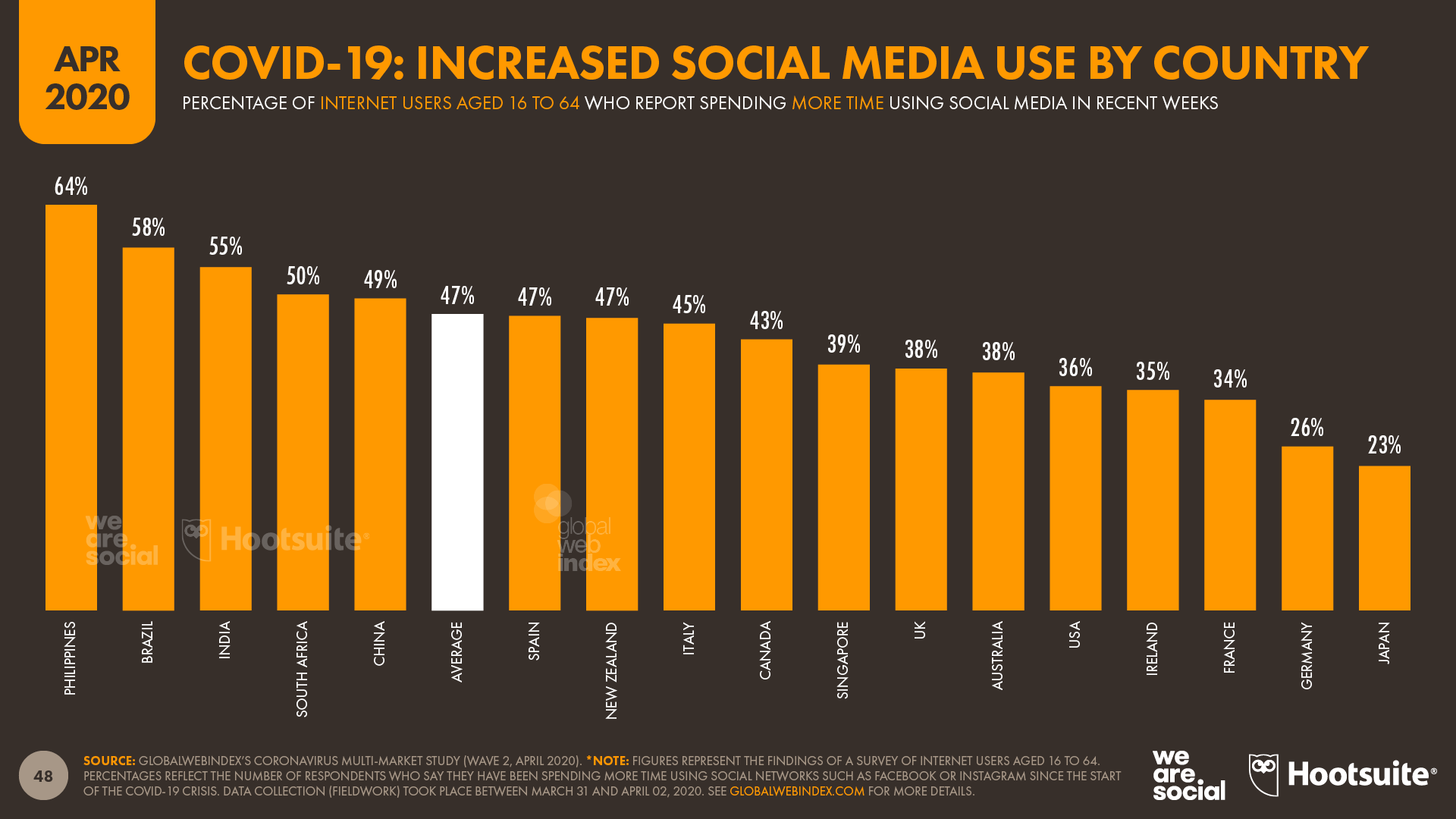 That’s plenty as in plenty of idle time available. So, where would Filipinos spend it?

In fact, the Digital 2020 April Global Statshot Report of We Are Social, HootSuite, and Kepios, and their partners shows just that — the Philippines has made the biggest increase in the use of social media in 2020.

In their report they said that of the nearly 110 million Filipinos, around 64 percent or two-thirds of the population in GlobalWebIndex‘s study have increased their “social time.” Global average social media usage is 47 percent.

Other countries such as Brazil, India, and South Africa have also shown more than 50 percent spikes in their peoples’ social media activity.

In the same Digital 2020 report, the Philippines still has the highest “social time” globally, registering close to fours hours (3 hours and 53 minutes) a day. Average Filipino internet user surveyed is aged 16 to 64.

Colombia is second in this category with 3 hours and 45 minutes a day, Brazil at 3 hours and 31 minutes.

Also in the global scale, more than 3.8 billion people are social media, of which platforms Mark Zuckerberg’s Facebook leviathan is still the perennial No. 1 with 2.498 billion users.

Youtube and WhatsApp come in second and third, with identical numbers — 2,000 billion.

People using the internet have grown by 7 percent to 4.54 billion, more than half of the world population. A total of 298 million users propelled the uptick as gleaned from January 2019 figures.

If that’s a surprise, then consider that across the world there are over 5.19 billion people using mobile phones, an increase of 124 million or 2.4 percent compare to last year’s. The report said the total world population is at 7.7 billion.

“The average internet user,” says the We Are Social report, “now spends 6 hours and 43 minutes online each day. That’s 3 minutes less than this time last year, but still equates to more than 100 days of connected time per internet user, per year.”

Perhaps a more staggering number, the report indicated is that the users of internet across Earth “will spend a cumulative 1.25 billion years online in 2020.” (Emphasis supplied)

It said that over one-third of that internet time would be used on social media.

Closer to home, the Philippines internet use account for an average of 9 hours and 45 minutes online daily. Japan only spends 4 hours and 22 minutes.

The Digital 2020 report, on the other hand, noted that since the initial mention of “The Next Billion,” over 2 billion people have come online. But of the total world population, around 3.2 billion people (slightly more than 40 percent) have remained disconnected to the internet.

Of the “unconnected” people, over 1 billion are in Southeast Asia with 31 percent of the total.

“Countries in Africa account for 27 percent of the total, with 870 million people yet to come online across the continent as a whole,” the Digital 2020 report says. (SDN)

All images from We Are Social/Digital 2020 report.

Source: We Are Social, HootSuite, Kepios and their partners.