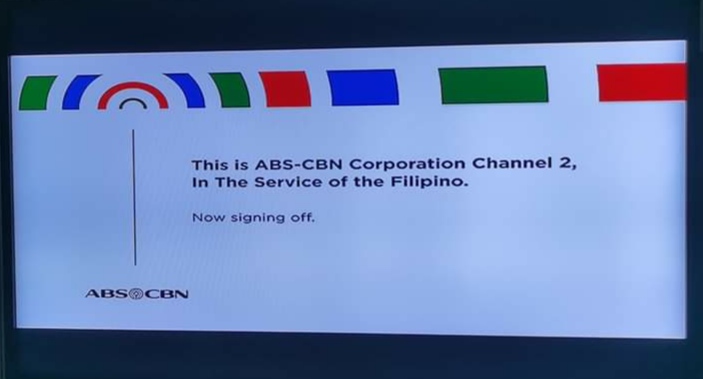 The government has just issued a “cease and desist order” to the media giant ABS-CBN, ordering it to stop its TV and radio operations effective immediately.

Apparently, the order arose from the expiry of the media entity’s franchise and its non-renewal by Congress.

ABS-CBN complied, signing off close to 8 p.m. after its prime time newscast, the TV Patrol, which to many viewers was a habit from long ago.

Newscasters Noli “Kabayan” de Castro and Ted Failon looked forlorn as they uttered their last words. Hopefully, just for the time being, and like the proverbial phoenix, ABS-CBN shall come rise again.

The network was still hopeful the government, that’s Congress, would see the light and give it another chance to resume operation with a new franchise.

Its franchise expired on Monday, May 4. It nevertheless continued its broadcast the next day. Until the fateful hour of its signing off.

It can be recalled that President Rodrigo R. Duterte had been hurling shots at the Lopez-owned media organization, saying it did not air its political advertisement during the campaign period for the May 2016 presidential elections. Among other issues.

The President, because of this, threatened to shut down the media organization, by opposing the renewal of its franchise. Only Congress, the House of Representatives, has the power to grant franchises. Duterte’s allies, though, like all incumbents, are dominant in the Lower Chamber.

But the presidential anger appeared to have been calmed, especially that officials of the media titan apologized to the President, though not necessarily admitting fault in the advertising controversy.

Duterte said ABS-CBN accepted his money but did not air his campaign placement.

Congress under the leadership of Speaker Allan Peter Cayetano was not able to completely tackle the media organization’s franchise renewal before it adjourned. Recall that even Cayetano, a former senator, also had an issue with ABS-CBN.

The National Telecommunications Commission (NTC), an agency under the Department of Information and Communications Technology (DICT), issued Tuesday afternoon the order to ABS-CBN to shut down its TV and radio broadcast operations.

It can be recalled the NTC less than a month ago said it will allow the media network and its subsidiaries to continue operating through a provisional authority until June 2022 to give time for Congress to deliberate on its bid for franchise renewal.

NTC Deputy Commissioner Edgardo Cabarios issued the assurance after receiving resolutions from the Senate and the House supporting ABS-CBN’s continued operation pending renewal of its franchise that expired Monday.

“The advice is, if there is a concurrent resolution already, then we can issue the provisional authority,” he said in Pilipino as reported by ABS-CBN News online on March 11.

ABS-CBN and its subsidiaries have over 11,000 employees who will lose their means of livelihood. Think times five each of the employees, how many mouths will go hungry.

Not to mention the difficult and trying time Filipinos are in presently because of Covid-19 pandemic.

The media giant issued a statement on the NTC’s cease and desist order.

“Millions of Filipinos will lose their source of news and entertainment when ABS-CBN is ordered to go off-air on TV and radio tonight (5 May 2020) when people need crucial and timely information as the nation deals with the Covid-19 pandemic.

“This in compliance with the cease and desist order issued by the National Telecommunications Commission (NTC) today that prohibits ABS-CBN from continuing its broadcast operations effective immediately.”

After its newscast Tuesday evening, ABS-CBN signed off.

In its statement, the media titan recalled Cayetano’s giving an assurance in an interview with DZMM radio last week “that there is no move to shut down the network.”

The NTC gave the network 10 days from receiving the order to respond as well as explain why its frequencies should not be taken back.

ABS-CBN is hopeful the government will decide on its “franchise with the best interest of the Filipino people in mind, recognizing ABS-CBN’s role and efforts in providing the latest news and information during these challenging times.”

ABS-CBN was shutdown for the first time during martial law in 1972.

Meanwhile, what happens next is everyone’s guest. (SDN)