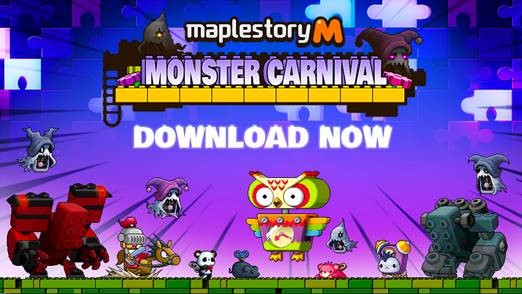 While in battle, players can earn Carnival Points, which can be used to summon special monsters to attack the opposing team or give buffs to their team’s monsters. Upon clearing the dungeon, winners can obtain gold leaves and epic or unique items such as Spiegelmann’s Chaos Necklace.

Alongside the addition of the new Monster Carnival dungeon, character re-balancing has been implemented for all Cygnus Knights classes, including Dawn Warrior, Wind Archer, Night Walker, Blaze Wizard, Thunder Breaker and the three new Explorers: Hero, Shadower, and Arch-Mage Ice/Lightning and Evan.

Additionally, Spring celebration and other in-game events will be available starting March 7.

●       Soul Made Event – From March 13 to March 27, Maplers can collect “Soul Made Coins” by hunting monsters during the event duration and trade coins in the Event Shop for Soul Made materials. (MapleStory M Press Release)