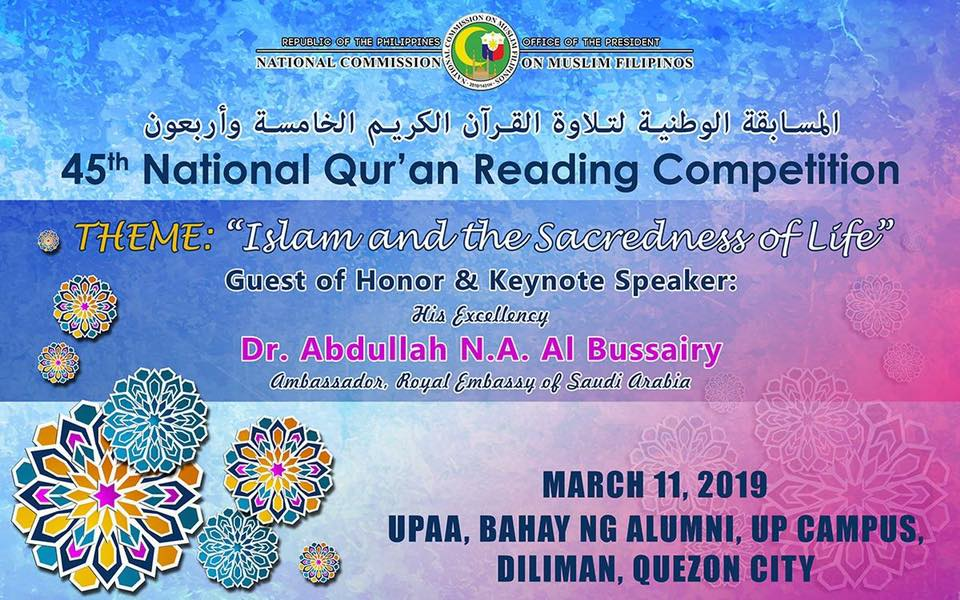 PRESIDENT Rodrigo R. Duterte on Sunday exhorted Muslims in the Philippines to spread the message of peace of Islam.

The President, who has often times expressed his kinship with Moros, or the Muslim Filipinos, through his M’ranaw bloodline, conveyed the message on the occasion of the holding of the  45th National Qur’an Reading Competition (NQRC).

To be held today, March 11, the NQRC is an annual major program of the National Commission on Muslim Filipinos (NCMF) now headed by Secretary/CEO Saidamen B. Pangarungan.

It will be held at the University of the Philippines Alumni Association (UPAA), Bahay ng (House of) Alumni, UP Campus, Diliman, Quezon City, whole day of Monday.

The them of the event is “Islam and the Sacredness of Life.”

Competing in the event are 36 participants in the female and male categories who are regional champions representing their respective regions.

“As you play an important role in raising public awareness on how Islam values the sanctity of life, I ask you to spread Allah’s (God in Arabic) message of peace as we forge a stronger nation that is no longer divided by ethnicity or religious affiliation, but strengthened by tolerance, inclusivity and mutual respect for one another,” Duterte said.

He recalled that since 1976 the government has provided support and encouragement to the local Muslims who wish to represent the country in international Qur’an reading competitions.

“NCMF continues this tradition by working towards the preservation and promotion of Islamic heritage through this event that aims to strengthen our relations with the Muslim community across the world,” the President, the first Mindanao leader to be come Chief Executive of the Philippines, said.

The President wished the participants the best, saying their success in the competition “will surely inspire our people,” the youth in particular, to further study, appreciate and apply the Qur’an’s teachings in their daily lives.

On Friday, Pangarungan reminded Muslims on their responsibilities as citizens of the Philippines.

The NCMF secretary said “our (responsibilities is) to Allah, our communities, and to our nation.”

Handling the NQRC is the Bureau of Muslim Cultural Affairs (NCMF-BMCA). (EKU)