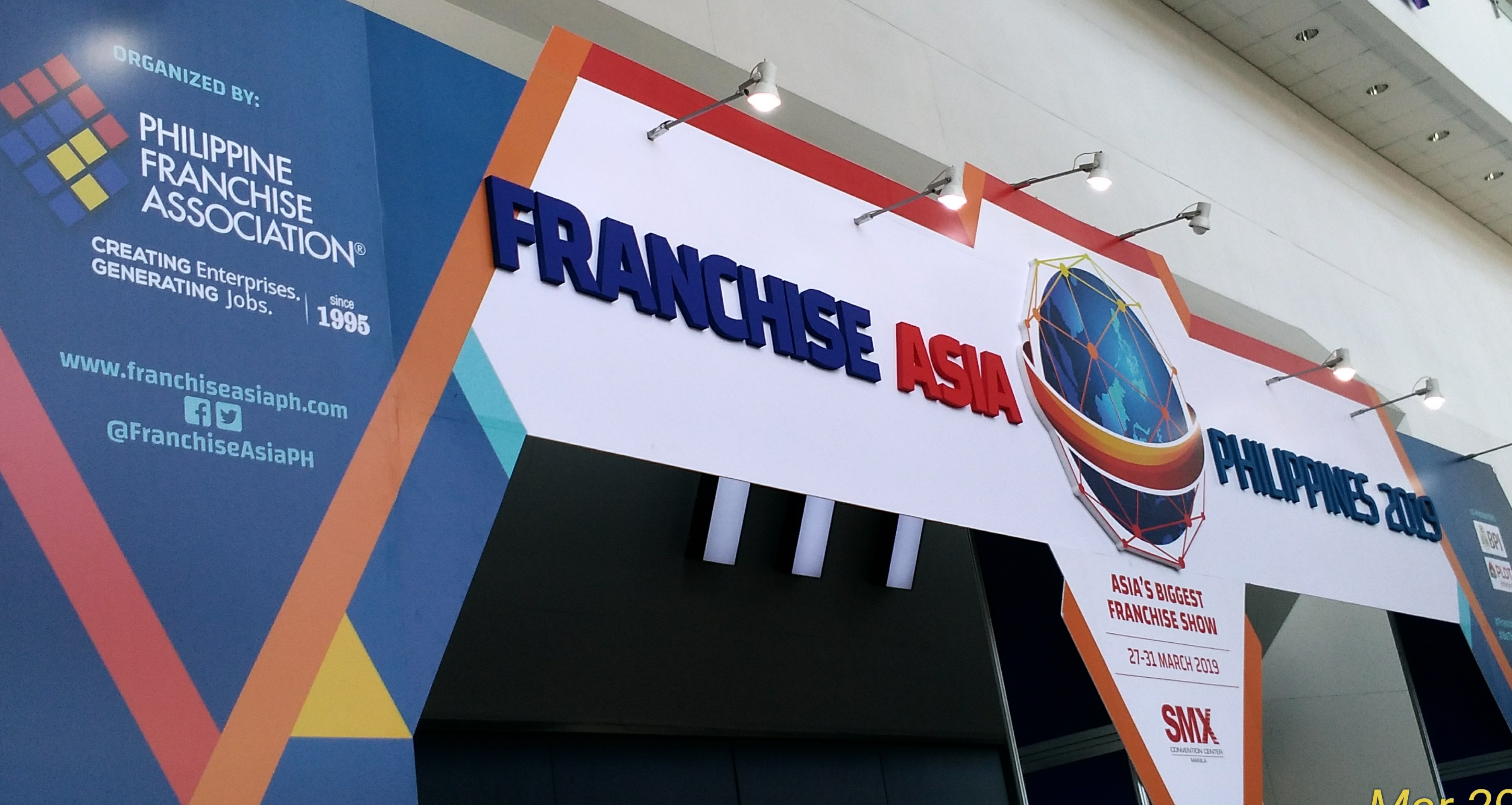 FRANCHISING is thriving in the Philippines. Perhaps, that’s an understatement.

Consider that Francorp, known as a global leader in franchise development and consulting, has just introduced and launched over 20 new clients in its growing roster of franchisors.

Francop Philippines executives introduced the varied groups of small and medium enterprises (SMEs) and four established companies on March 29 at the Franchise Asia 2019 being held until March 31 at the SMX Convention Center, Mall of Asia Complex, Pasay City.

Francorp Philippines officials and owners of its more than 20 new franchising clients join for posterity. Francorp launched its new clients on March 29 at Franchise Asia 2019. (All photos by SDN — Science and Digital News)

The event also served as venue for the Department of Trade and Industry (DTI) to introduced the concept of halal — now virtually sweeping the world as a “hygienic, healthy and pure organic” food.

His presence at the Franchise Asia 2019 turned into an opportunity for the halal industry as the event attracted around 750 companies — many of them in food production — that put up their exhibit booths at the three-day event.

The DTI official lost no time, taking advantage of the chance to introduce halal as he delivered the Welcome Remarks.

“Halal” is an Arabic world which means “permissible” or “allowable” or “legal” in English. When applied to food, it refers to food products that do not contain pork, alcohol and their derivatives, and other substances forbidden to Muslim by Shari’ah Law.

Macatoman said with Republic Act 10817’s enactment the government has “raised the Philippine Halal Standards to become competitive to other Muslim and non-Muslim countries.”

R.A. 10817 is also known as the Act creating the Philippine Halal Export Board Development and Promotion Program, which is under the DTI.

“In view of this very encouraging development, we are planning to put Philippine halal products on every shelves in supermarkets and grocery stores in the Middle East, together with our other Philippine products,” Macatoman, the DTI undersecretary for Special Concerns, told Francorp officials, owners of companies, and thousands of visitors.

Jesi Lee G. Endrina, founder of Samgyeopsal House, wipes her eyes as she recalls how she and her husband started their burger business. At left is Dr. Rogelio C. Aquino, chief medical consultant of NephroMedAsia.

Macatoman said the world has a vast halal market that gives rise to US$3.2 trillion halal trade. He is correct.

The United States-based Pew Research Center puts the world Muslim population at 1.8 billion as of 2017 and “the fastest growing religion in the world” because of “faster birth rate” at “2.7 children per family vs. 2.2 children for Christian families.”

Pew predicted that the global Muslim population “will grow to 2.76 billion, or 29.7 percent of world population” by 2050.

That’s a gargantuan market by all means.

For food products as well as pharmaceuticals and cosmetics to be considered halal, they must undergo scientific tests through laboratory for halal, and certified halal if it passes the stringent examination.

“You will not lose anything if your products are going to be certified halal. Instead, your Muslim customers will increase because we Muslims are your buyers,” said Macatoman, saying the Philippines has around 11 million Muslim population.

The DTI can help you know what products can be certified as halal and, therefore, allowable for Muslims to eat or use in case of non-food products, he emphasized.

“But even if the market (for halal) is vast, and the opportunity is huge, we at the (DTI) cannot do this mandate alone. We definitely have to engage the other concerned government agencies, cooperatives business associations like tge Philippine Franchise Association (FPA) to work together to make the goal of an established Philippine Halal industry a reality,” said Macatoman.

“Through FPA, you can introduce franchise concepts and encourage the franchising opportunities for our halal products. On the part of DTI, we need to intensify our efforts in the capacity-building programs for our Muslim entrepreneurs for sustainability,” he added.

“Let us collaborate in promoting and expanding our halal industry,” said Macatoman, as he thanked FPA for its initiatives towards raising awareness about the halal industry and congratulated them for the successful Franchise Asia 2019.

Meanwhile, except for four brands which have already made a name for themselves, the rest of the new Francorp client franchisors — although they have been in business for a few years already — they are considered relatively knew.

Francorp executives underscored the presence of new franchisors founded and led by women just as “the Philippines (is) strongly advocating gender empowerment and becoming the ninth most gender-equal nation.”

Meaning that “more and more Filipino businesswomen are making powerful stride in the business industry.”

Of the newly-launched and now under the guidance of Francorp to help them grown and expand, Kko Koko, Supreme Hotdogs, Samgyeopsal House, Tapawarma, and House of Taho are women-led. Francorp gave recognition to the women’s leading role in their businesses.

Kko Kko, founded in 2016, is lead by celebrity-turned-businesswoman Grace Lee who with her mom wanted to share Korean food culture with Filipinos.

Odette Santiago founded Supreme Hotdogs; Jesi Lee Endrina, who can’t control her emotions at the introductory press conference and had to stop before gathering herself, established Samgyeopsal House inspired by a family dinner that feasted on Korean burger; Ladyh Oliva, previously a call center agent worker, “re-invented shawarma, a popular Middle Eastern dish. She and her husband introduced “the first and original Pinoy shawarma which combines the savory taste of beef tapa (grilled beef) and the concept of the shawarma wrap; and businesswoman Elena Zayco created House of Taho in 2015, offering “a food product that resonates among Filipino consumers.”

Francorp Philippines, established in Manila in 1996, is part of the global network of Francorp International. (SDN — Science and Digital News)