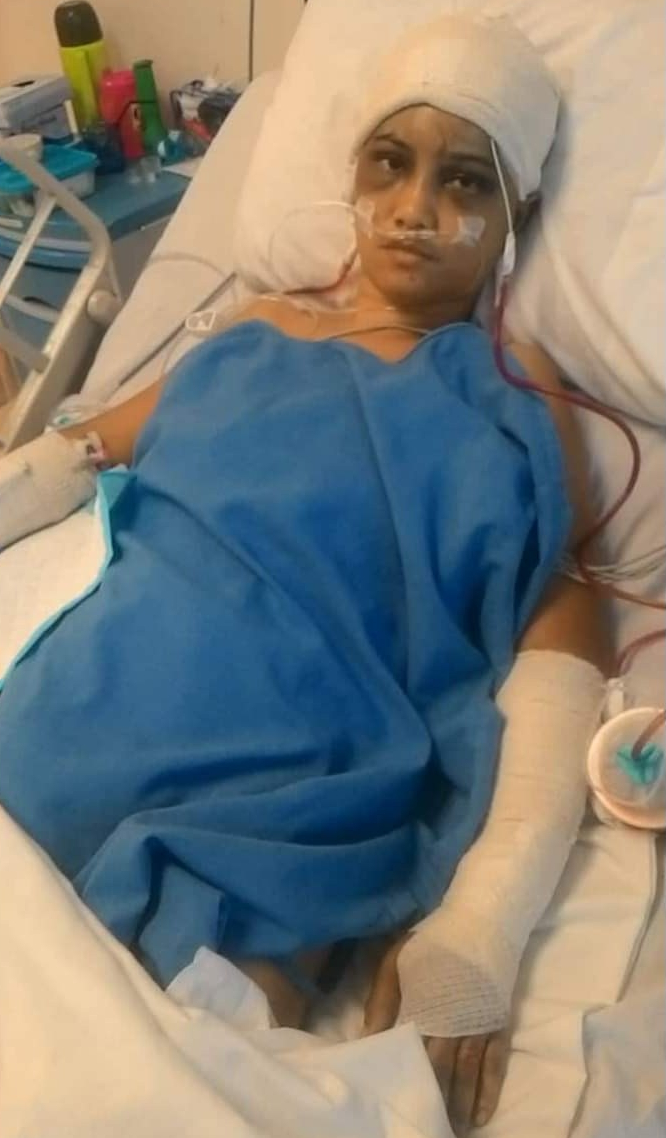 Is she ever going to walk again?

How can these human parts not be broken after being hit, apparently, repeatedly, by a 6-foot woman using a vase and a long rounded wood in beating up Penny Fritz Gutierrez Pido, 39.

Yes, that’s what the daughter of Pido’s employer wielded on May 8, a beating that lasted about two hours, a younger sister of hers, Jackylin Pido, 37, narrated on Tuesday to SDN — Science and Digital News.

The younger Pido is watching over her sister since May 21 at the Borneo Medical Centre in Kuching, Sarawak, Malaysia.

In the video is the beaten up overseas Filipino worker (OFW).

Here’s Penny Fritz G. Pido, 39, still in her hospital bed in Kuching, Sarawak, Malaysia, as of May 28. She was hospitalized on May 9 after a terrible abuse and beating allegedly inflicted by a daughter of her employers; the male a British and his wife a native Malaysian of the State of Sarawak. Jackylin G. Pido, her younger sister, provided the video via Messenger. The younger Pido said her sister maybe discharge from the hospital on Wednesday, May 29, but no certainty yet, though. (Jackylin Pido)

How it happened, let’s hear it from her sister, as told by the older sister, unedited, via Messenger:

“Yes, sir. About 5 p.m. when her female employer brought her to their house to work. It’s because the employer said she will be fetched at 7 p.m. because the flight of her daughter going back to the UK is 8 p.m. At first my sister did not want to go because the daughter was already mad at her. But she (employer) said (her daughter) was no longer at home. She was beaten for two hours because it was 7 p.m. when the daughter took her bath. She also bathed my sister even though she has injuries on her head. She (daughter) used a vase in hitting her head. Then, she dragged her to a room where (my sister) saw on the bed a long and rounded wood. That’s what she used to hit her, that is why her hands and arms where fractured.”

Meanwhile, OFWs working in Malaysia has issued statement urging the Philippine government to hasten the search for justice for Penny Pido.

The Asosasyon ng Makabayang Manggagawang Pilipino Overseas (AMMPO), or the Association of Nationalist Filipino Workers provided SDN — Science and Digital News a copy of their statement.

AMMPO is an organization of household workers in Malaysia. They urged the “Philippine government thru its embassy in Kuala Lumpur to expedite the investigation process and to fully assist Penny Fritz Pido, 39 years olds, a documented domestic worker in Malaysia, a victim of violent physical abuse, in her quest for justice.”

AMMPO added that she was “physically abused by the daughter of her employer who left immediately for London (England) on May 8, on the same day the incident happened.”

“Asosasyon ng Makabayang Manggagawang Pilipino Overseas  (AMMPO)(Association of Nationalist Filipino Workers), a Filipino domestic workers group in Malaysia, urges the Philippine government thru its embassy in Kuala Lumpur to expedite the investigation process and to fully assist Penny Fritz Pido, 39 years old, a documented domestic worker in Malaysia, a victim of violent physical abuse, in her quest for justice. Pido was physically abused by the daughter of her employer who left immediately for London on May 8, on the same day the incident happened.  The abuser is known to be a British citizen with a mixed British and Sarawakian parentage.

“As initially revealed in a Facebook post and thereafter reported in the media in the past several days, Pido sustained head injuries, a broken hand and wrist and leg. Pido is a single mother of two children in the Philippines.

“It’s been 20 days since the physical abuse happened and no one from the Philippine Embassy visited her in the hospital, although a promise of a lawyer’s  visit on Wednesday this week is made.

“AMMPO also calls for the Philippine government to ensure that worker protection abroad is wholistic, comprehensive and sustainable rather than view each abuse as isolated. Over and above, it also press on the Philippine government to view deployment of Filipino domestic workers abroad not as a norm and practice, by creating more job opportunities at home especially for poor Filipinos.”

Jackylin Pido said her sister, citing what doctors told her, can still be able to walk again but she needed therapy because of fractured small bones.

She added that the long and rounded wood used to hit her hands, arms and leg was similar to the diameter of a coffee cup. But it not a baseball bat.

She said a Philippine Embassy official in Kuala Lumpur told her in a text message she will come to visit on Wednesday, May 29, at the same time assuring assistance.

Her sister also appealed to President Rodrigo R. Duterte to help her in her quest for justice and provide her a livelihood when she comes home.

Penny Pido has two children — Mark Andrew, 16, and Margarette Amber, 11 — waiting for her return in Tondo, Manila, as well as her parents, Ver and Esther Pido.

Her ordeal became public after Bandar Kuching Minister of Parliament Kelvin Yii Lee Wuen posted an alert on his Facebook update on May 16.

He learned about the incident from a tip-off from concerned citizens.

The suspect, meanwhile, is reportedly being tracked down by the Interpol. (SDN)