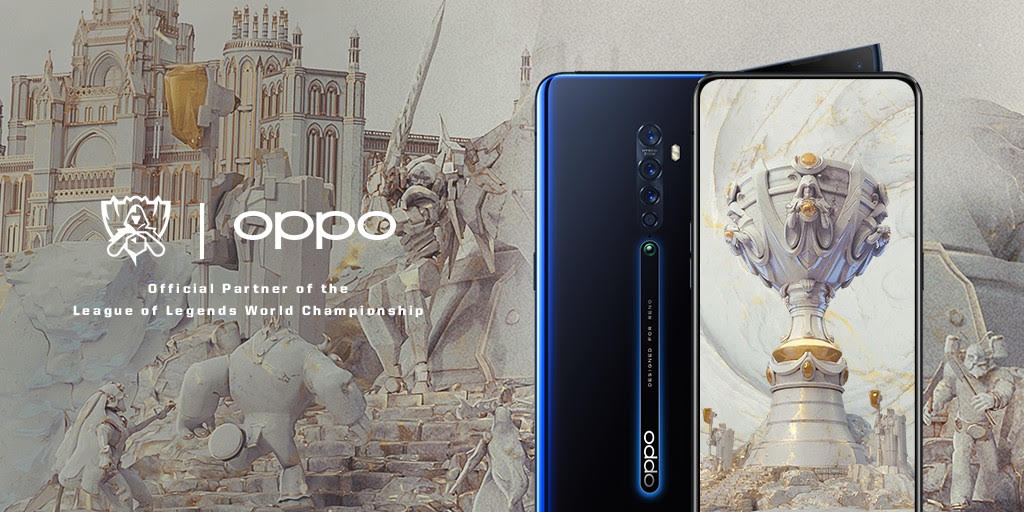 RIOT Games, the publisher of the most-played PC game in the world, recently announced a multi-year partnership with OPPO as the exclusive official global smartphone partner for League of Legends Ⓡ Esports international events.

These are the World Championship, the Mid-Season Invitational, and the All-Star Event. The multi-year partnership that will last until 2024 will begin in 2019, with World that kicked off on October 2 in Berlin, Germany, and then conclude on November 10 in Paris, France.

“Esports is a fast-growing sport globally, and League of Legends has become a lifestyle of many young people in recent years,” said Brian Shen, OPPO vice president and president of Global Marketing.

“As a consumer-centered brand, OPPO always seeks the right way to communicate with young people. This is a great move for Riot and OPPO; the partnership will allow us to continue to strengthen our bond with the young as we join them in celebrating the victory of each game.”

“OPPO’s commitment to design and innovation are cornerstones in everything they do, and we are thrilled to have them bring their pioneering spirit to our global sport and fanbase,” said Naz Aletaha, head of Global Esports Business Development and Partnerships for Riot Games.

“To be OPPO’s first Esports league partner is a powerful testament to the resonance of League of Legends Esports, and we look forward to collaborating together to celebrate the sport, our fans, and the love of the game. ”

League of Legends joins OPPO’s roster of premier sport partners which includes Wimbledon, FC Barcelona, and the International Cricket Council, among others.

This partnership puts OPPO at the center of the burgeoning global Esports market, as they join League of Legends Esports best-in-class partners like Mastercard, State Farm, Alienware, Secretlab, and Louis Vuitton.

Through this partnership, League of Legends will look to further enhance fans’ live event and viewing experiences around its marquee global sporting events, while OPPO’s long-term commitment to the industry allows them to engage with the growing passionate player base of the world’s top esport.

As the exclusive global smartphone partner for League of Legends esports, OPPO will have year-round activation centered around the sport’s three annual global tournaments: the Mid-Season Invitational, the All-Star Event, and the World Championship, which attracted 99.6 million unique viewers last season.

Starting with the 2019 World Championship, OPPO will bring fans closer to the biggest Esport events of the year through unique activation, including:

● MVP Presented by OPPO: As the first global presenting partner for the Most Valuable Player award at the World Championship and Mid-Season Invitational, OPPO will celebrate the most winning performance for the most critical matches of the season.

● OPPO Cam: During the broadcasts of the World Championship, the OPPO Cam will bring millions of fans tuning in closer to the biggest competition of the Esports season. From cosplay to behind-the-scenes look-ins, the OPPO Cam will allow fans watching from around the world to look in on the live event experience by leveraging OPPO’s unparalleled phone camera technology.

● Welcome to the Rift: OPPO will spotlight teams making their inaugural appearance at Worlds, allowing fans an inside look at the next League of Legend prodigies, the top underdog contenders, and the most dangerous dark horses.

OPPO also will activate a series of consumer promotions that give players a chance to win a trip with behind-the-scenes access to the World Championship, All-Star Event, or Mid-Season Invitational.

OPPO is dedicated to producing products infused with art and innovative technology. In less than a decade, the company has become one of the top four global smartphone brands and continues to lead the smartphone industry in 5G development. OPPO’s Game Center operation is unmatched with over 130 million active monthly game users across nine thousand games operated on their devices.

In only 120 minutes of its official release in the market on September 28 last month, the smartphone from the Chinese tech firm made a killing of Php100 million worth of sales.

The smartphone, which OPPO Philippines officially launched in the country on September, sells for Php15,990.

If you are aching to own one, it is now available in all OPPO concept stores authorized dealers across the country.

The smartphone maker is also selling it on its e-commerce partner sites Lazada, Shopee, Akulaku, and Argomall.

Built-in inside the OPPO A9 2020 are “premium smartphone features that guarantees an immersive entertainment experience”, such as a 48MP Quad camera at the back, Dolby Atmos Dual Speakers, 5,000 mAh Ultra Battery, 8GB RAM, and 128GB internal storage for your cherished photographs and videos to perpetuate your life’s memories. (OPPO Philippines)