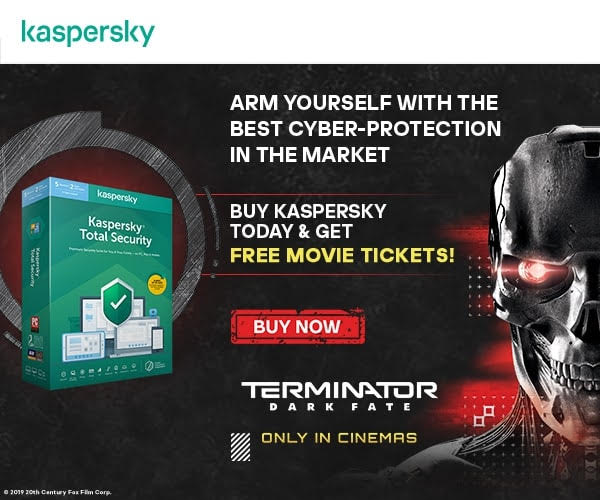 DID you miss Arnold Schwarzenegger’s 1984 ultra popular “The Terminator” movie and its subsequent sequels?

Another sequel is coming to the movie theaters near you, it is titled “Terminator: Dark Fate.:

And you can have a free ticket to the movie courtesy of a partnership between global cybersecurity company Kaspersky and 20th Century Fox, producer and distributor of many very popular movies.

The two organizations have inked a partnership for the launch of the latter’s “Terminator: Dark Fate” with Schwarzenegger and Linda Hamilton returning for the upcoming film.

With the team up between Kaspersky and 20th Century Fox, the former is offering free movie tickets and many other exciting prizes for its online customers in Southeast Asia.

Thousands of tickets for the movie are up for grabs, Kaspersky said in a email to SDN — Science and Digital News.

For every single purchase of Kaspersky solutions including Kaspersky Internet Security (KIS), Kaspersky Total Security (KTS), and Kaspersky Security Center (KSC), customers will get free tickets to see the gritty and intense sequel to the blockbuster 90s hit Terminator 2. This promo begins on September 1 to November 15 this year.

Best to be experienced on the big screen, “Terminator: Dark Fate” is the much-awaited, high-octane installment in the Terminator franchise. In this ultimate action chase spectacle a technologically enhanced human warrior from the future will emerge to protect an unsuspecting young woman from a lethal, relentless, state-of-the-art Terminator called Rev 9.

This film reunites Arnold Schwarzenegger as T800 and Linda Hamilton as Sarah Connor, who hunts and kills Terminators in the past.

Yeo Siang Tiong, general manager for Southeast Asia at Kaspersky, welcomed his company’s partnership with the maker of Hollywood blockbusters.

“We are excited to have this movie as our treat to our loyal customers. The newest Terminator flick will showcase all the potential breakthroughs in technology and what the future would look like utilizing disruptive technologies. It’s similar to what we do at Kaspersky — as we keep on staying ahead of potential threats, we get to give our customers the low-down on the next cyber threat looming in the web,” he said.

“But we don’t stop there. We continue to build a safer world for our customers as we say, bring on the future!”

Customers who purchase any of the Kaspersky products online at kaspersky.com would be able to redeem their tickets via email, regular mail or through pick-up to watch the Terminator film in select cinemas in each of the participating countries.

A purchase of KIS is equivalent to one free ticket while buying either a KTS or KSC license/code means a customer gets two free tickets. The SEA countries included in the promo are Indonesia, Malaysia, the Philippines, Singapore, Thailand, and Vietnam.

Terminator: Dark Fate will hit the theaters on November 1. (Kaspersky)