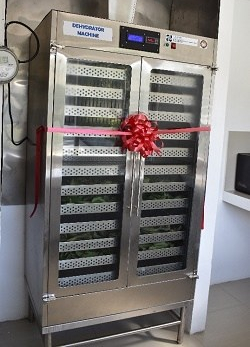 ​THE Department of Science and Technology (DOST) and its partners have launched a new dehydrator machine for herbal tea at the Ephrathah Farms, Barangay (Village) Sariri, Badiangan, Iloilo City.

This was developed through the project, “Design and Development of a Programmable Dehydrator Machine for Herbal Tea materials” funded by the Philippine Council for Agriculture, Aquatic and Natural Resources Research and Development of the DOST (DOST-PCAARRD).

Dr. Renerio S. Mucas, associate professor of the Iloilo Science and Technology University (ISAT U), led the project team that developed the machine. During the launching, Mucas said that the machine can dry fresh leaves of guava, moringa, guyabano, and roselle flower petals from the usual 0.5 kg/day to 5 kg/day at a lower energy cost. It uses solar energy and a back-up electric heater.

Through the PCAARRD-funded project, the team has completed the phytochemical screening of the herbal tea raw materials and products. They have optimized the drying protocol and analyzed the shelf life of the processed tea.

ISAT U led the launching and ribbon cutting ceremony in coordination with PCAARRD’s Agricultural Resources Management Research Division (ARMRD). In his welcome speech, University President Raul F. Muyong emphasized the innovation is one of the major thrusts of the university. The dehydrator machine is another milestone that will put the university at par with the leading universities of the region.

PCAARRD Deputy Executive Director for Research & Development (R&D) Officer-in-Charge (OIC) Dr. Juanito T. Batalon, in his message, congratulated ISAT U for the accomplishment and expressed support for other proposed projects of the university.

Engr. Ed Roderick V. Canuto, general manager of Ephrathah Farms, appreciated the help of ISAT U and PCAARRD in improving and making their tea production more efficient and their tea products more competitive in the local and international markets. He expressed willingness to work with ISAT U for more research undertakings especially on smart farming technologies in the future.

ISAT U has already filed the patent for this machine at the Intellectual Property Office of the Philippines (IPOPhil). A paper titled “Performance evaluation of a programmable dehydrator machine for herbal tea materials” has been published at the International Journal of Engineering Science and Computing.

The machine has potential for dehydrating other crops and fishery products. Its introduction to the public is expected to raise production capacity and product quality of tea materials in the region.

The country’s soybean industry is threatened by tight competition with other crops such as rice and corn in terms of production area. This is further challenged by unfavorable supply chain and volatile prices. The limited expansion of production and low utilization of soyfood hinder the industry’s take off.

It is being implemented by the Surigao del Sur State University (SDSSU), led by Dr. Jocelyn B. Panduyos, director of SDSSU Research and Extension Division.

It also aims to develop sustainable soybean production in the uplands through improved cropping system, seed system, and varieties.

An inception meeting for the project was held recently at SDSSU, Rosario, Tandag City, Surigao del Sur, to discuss its components and objectives.

Potential micro-entrepreneurs and consumers in urban areas will also benefit through soyfood processing seminars. Soyfood-related enterprises will be promoted and technical assistance and linkages will be provided to different stakeholders.

Local government units (LGUs) will also be aided in their food sufficiency programs through the use of soybean in their health and nutrition campaign.

Dr. Nemesio G. Loayon, SDSSU vice president for Research and Extension, expressed his gratitude and appreciation to DOST-PCAARRD for putting value and support to the University’s research endeavor.

With the potential of SDSSU on soybean research, DOST-PCAARRD Industry Strategic S&T Program (ISP) Manager for Legumes, Rolando S. Corpuz, envisions SDSSU as the future Soybean R&D Center under the DOST’s Niche Centers in the Regions for R&D (NICER) Program, which aims to capacitate higher education institutions (HEIs) through upgrading, development, and acquisition of S&T infrastructure and establish R&D Centers that will cater to the specific needs of the Regions.

Featured image is the new Dehydrator Machine. All images from PCAARRD.