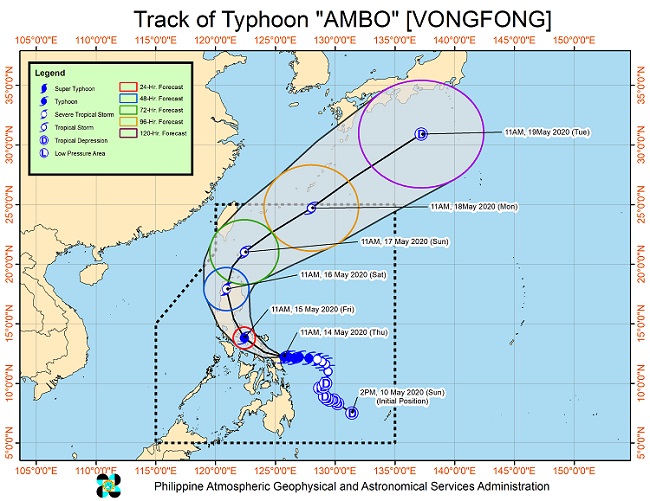 The “touchdowns” are in:

Severe Weather Bulletin #21 of the Philippine Atmospheric, Geophysical and Astronomical Services Administration of the Department of Science and Technology (DOST-PAGASA) issued at 11 a.m. said the eyewall region of the typhoon “is bringing destructive and heavy to intense rainfall over the northern portion of Bondoc Peninsula in Southern Quezon.”

Accordingly, because of the hazards that “Ambo” brings to the above areas, PAGASA urged residents to take appropriate measures as well as coordinate with local disaster risk reduction and management (LDRRM) offices.

The affected residents should also continue to monitor for updates from the weather bureau, particularly the rainfall or thunderstorm advisories in their localities as well as PAGASA Regional Services Divisions (PRSD) warnings on heavy rainfall.

It also warned of possible flooding and rain-induced landslides in highly to very highly susceptible areas during heavy or prolonged rainfall.

PAGASA further warned of risky sea-borne travels because of the potential conditions of coastal waters.

“Sea travel is risky for all types of seacrafts over the seaboards of areas under TCWS (Tropical Cyclone Warning System),” the weather bureau said.

PAGASA storm analysts tracked the eye of “Ambo” at 10 a.m. Friday in the vicinity of Catanauan, Quezon, using all available data. The typhoon is moving northeast with speed of 20 km per hour.

The typhoon’s strength was determined to have maximum sustained winds of 125 km per hour near the center and gustiness of up to 165 km per hour.