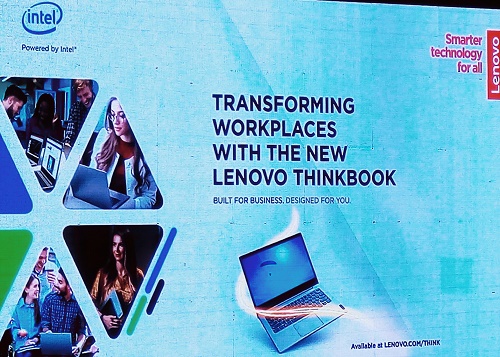 LENOVO Philippines, one of China’s tech giants, has roared its last hurray for 2019, capping off a series of big event, including launches of new consumer products.

The event introduced to the Philippine market the Lenovo ThinkBook 14″ and ThinkBook 15″ laptops geared “for modern professionals.”

Lenovo is described as a “global innovation and technology leader.” Its two latest laptops of the ThinkBook series were designed primarily for today’s young and digitall-inclined professionals who seek the perfect balance between high-end specification and premium aesthetics in work devices.”

The company cited a study that Forrester Consulting (A Global Study of SMB Employee and Device Buyer Experience 2019) conducted on the transformation in the workplace. It showed that today’s millennials and Gen Z workers are more inclined to the appearance and material of work laptops as the features they put the most value on.

Aside from that considerations, millennials also want devices complementing their personality and that also provides smartphone-like experiences.

The study also noted that 60 percent of the new workforce consists of two age groups (millennials and Gen Z).

Responding to those findings, Lenovo crafted the ThinkBook include in-demand features such as collaboration tools required to remain agile, the durability to handle work on-the-go, enhanced connectivity, artificial intelligence (AI)-based technology, and enterprise-level support for users’ greater peace of mind.

Ngan said those characteristics were embedded with the ThinkBooks.

“The ThinkBook 14 and 15 combine standout performance and sophisticated design on one neat package. Designed for optimum productivity, these devices are built to keep up with the demands of the modern workplace. With Lenovo, we want you to work smarter — not harder,” he emphasized.

Lenovo recalled that the Think brand was earlier known for their being a go-to-business device, designed for big enterprises, by tradition.

But with the new ThinkBook line, the company is offering small and medium businesses (SMBs) as well as entrepreneurs a professional-level device that are both stylish and powerful.

Both the ThinkBook 14 and ThinkBook 15 offer full HD (1920 x 1080) resolution anti-glare IPS panels, with the screens bendable up to 180°, making it easy to collaborate and share. They come with narrow bezels, promising a screen-to-body ratio of 80% and up, leaving plenty of room for work which means less distractions for the user.

Both devices feature lightning-quick processing thanks to their powerful 10th-generation Intel® Core™ processors. According to Intel, these processors boast 2.5x faster AI performance, 3x faster connectivity due to Wi-Fi 6 support, and has up to 2x the graphics performance compared to the 8th Gen Intel® Core™ processors. The ThinkBook 14 has an Intel Core i5-10210U processor, while the ThinkBook 15 is equipped with an Intel Core i7-10510U processor.

The devices are further enhanced by their memory and storage, with both coming with 8GB DDR4 memory and 512GB M.2 solid-state drives, allowing for faster loading times. In terms of graphics, the ThinkBook 14 will have Integrated Intel® UHD Graphics while the ThinkBook 15 is powered by an AMD Radeon™ 620 graphics card.

For premium style and appearance, the two devices come with a sleek mineral gray finish made of aluminum. Both laptops are also MIL-SPEC-tested, making them durable enough to withstand the rigors of everyday business use and other conditions such as water spills and extreme high or low temperatures.

The ThinkBook 14 and 15 have several pre-loaded features designed to boost productivity. With an integrated fingerprint reader on the Smart Power Button, users can log in or boot up instantly just like on a smartphone. Furthermore, Skype calls can be made or dropped by clicking designated Business Hot Keys. Both devices also come with an Intel® Optane™ Memory Module, which allows for faster access to frequently used business apps and the Trusted Platform Module, which enables Windows 10 security features and encrypts user data.

Truly meant to support modern workers, both devices are covered by Lenovo’s comprehensive support portfolio which includes services such as Think Service & Support that provides automatic access to business-grade expertise; Accidental Damage Protection (ADP) support that covers damages not usually part of standard warranties such as minor spills, drops, or damages to the screen; and Onsite Next Business Day Support, a support service exclusive to Think devices wherein technical support and expertise will be provided within the next business day on premises. (Lenovo Philippines)