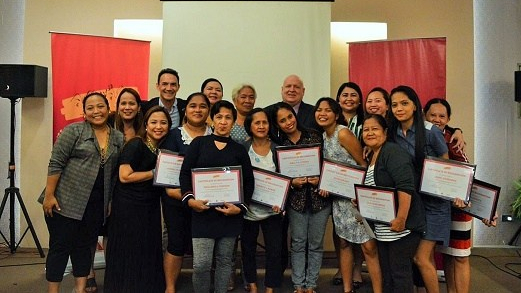 (SDN) — EMPOWERING women is thriving in Quezon City under the leadership of Mayor Josefina “Joy” Belmonte.

Her active involvement in this initiative can be traced back to her being the city’s vice mayor about four years ago. Or even earlier when she was starting her career in public service.

And now as the mayor, she has not abandoned her advocacy, which she realizes and implements in partnership with SPARK! Philippines.

The parties will be collaborating for the mayor’s 2020 programs pushing women economic empowerment further.

SPARK! Philippines is a “gender equality organization” while Belmonte is a “staunch advocate in advancing women’s role in the economy.”

As a result of their successes in the past, Belmonte and SPARK! are again collaborating this year for three more projects.

Centers open for everyone for minimal fee

Backed by the Embassy of New Zealand, AWEB is a multi-year, three-area program through which aspiring women entrepreneurs from four new partner barangays in the city’s District 1 were trained. SPARK! said District 1 is the city’s poorest barangay.

The program received seed capital for their businesses. They will receive additional capital in the coming nine months upon accomplishing their respective indicators.

WAVE is backed by the Embassy of the Kingdom of the Netherlands. It will train women with diverse gender identity and sexual orientation, including lesbian, bisexual, and trans-women.

“At the end of training, they will be given seed grants to materialize their business ideas and will be monitored in the next 12 months,” SPARK! said.

The project beneficiaries will be provided with tangible assets for business. Three barangays will receive 40 sewing machines (two under the Shared Services Facility through DTI; the third one to get the sewing machines from the Quezon City Women’s Sewing Machine Center project supported by the Embassy of Germany in the Philippines.

SPARK! said the facilities are open to anyone to use for a minimal fee, adding the objective for the sewing machine centers is “to serve as a resource center for women to have access to skills training and use of the machines to help them achieve economic independence.”

It can be recalled that Belmonte started working with the organization in 2016 when she was still Quezon City vice mayor. Their partnership continues now that is the city chief executive.

Their collaboration took off through “Likhang Pilipina” held at shopping center Ali Mall in the city as they provided a platform for budding Filipina entrepreneurs in showcasing their creativity and entrepreneurial skills. It was an opportunity for them at the same time to offer their products to the public.

For the marketplace where they displayed their products, it is now on its fifth year of operation through a partnership with the Araneta Group of Companies and the Department of Trade and Industry (DTI).

The year 2016 also witnessed what SPARK! dubbed a revolutionary program called “LIPAD Pinay”, also known as Local Inclusiveness Project for the Advancement of Filipino Women implemented in Quezon City through Belmonte and a funding support from Seaoil Foundation.

LIPAD Pinay was a two-year program which engaged eight city barangays (villages) through capacity development of the village leaders in improving access, provision and control of resources, opportunities, and benefits to lay down the foundation for an enabling environment to sustain and grow women-led micro and small enterprises in the leaders’ respective barangays.

Under the program, 20 women from each area underwent training on entrepreneurship that they then used to establish their own business and community cooperatives. Products from the program are still being sold at Likhang Pilipina.

“The successes of LIPAD Pinay in uplifting the lives of more than 150 women and their families became an indicator for Mayor Joy Belmonte and SPARK! to partner in three more projects in 2020,” a statement from SPARK! Philippines pointed out. (SDN’SPARK!)

Featured image with their certificates from SPARK! Philippines.