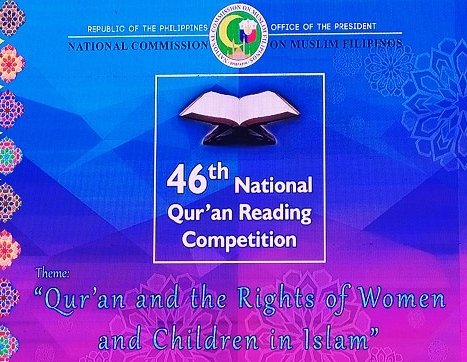 As part the prize for their feats the two winners also received Php25,000 each and a chance to travel to join international Qur’anic competitions this year.

Amerol defended the crown she won in 2019 in the Female Bracket.

All the six top placers also received a trophy each.

Over at Malacañang Palace, President Rodrigo R. Duterte sent his felicitations to the NCMF, contestants, and guests.

“I commend the NCMF for continuously promoting the active engagement of Filipino Muslims in nation building. Indeed, your conscientious efforts to nurture the Islamic faith among believers by showcasing the richness and diversity of your culture through noteworthy activities are truly praiseworthy,” the President said.

He urged the local Muslims to join the government in pursuing a more united, peaceful and progressive Philippines.

The NQRC is one of the mainstay programs of the commission, which is aimed at preserving, enhancing, and promoting the cultural heritage of the Moro population, the country’s Muslim community.

Pangarungan welcomed the participants and guests at the event held at the Park Inn in Quezon City, Metro Manila.

In his brief remarks, he mentioned the struggles and hardships being experienced by Muslims in various parts of the world.

Pangarungan lauded the event’s theme, “Qur’an and the Rights of Women and Children in Islam.”

“I applaud the stand of this Commission to articulate the important role of women and children not only in a Muslim society but also in other society that is functioning and just.

“Women’s well-being and development and children’s right to genetic purity, name, dignity, shelter, and healthcare to name a few are deemed not only by the Qur’an but also by international legal instruments as absolutely necessary,” he emphasized.

He thanked Duterte for being the “father of the nation” who has always look out for the welfare of Philippine Muslims.

Guiwan bested 16 other male contestants while Amerol was best among 19 Qur’an readers in the Female Bracket. (SDN)

All photographs by SDN.