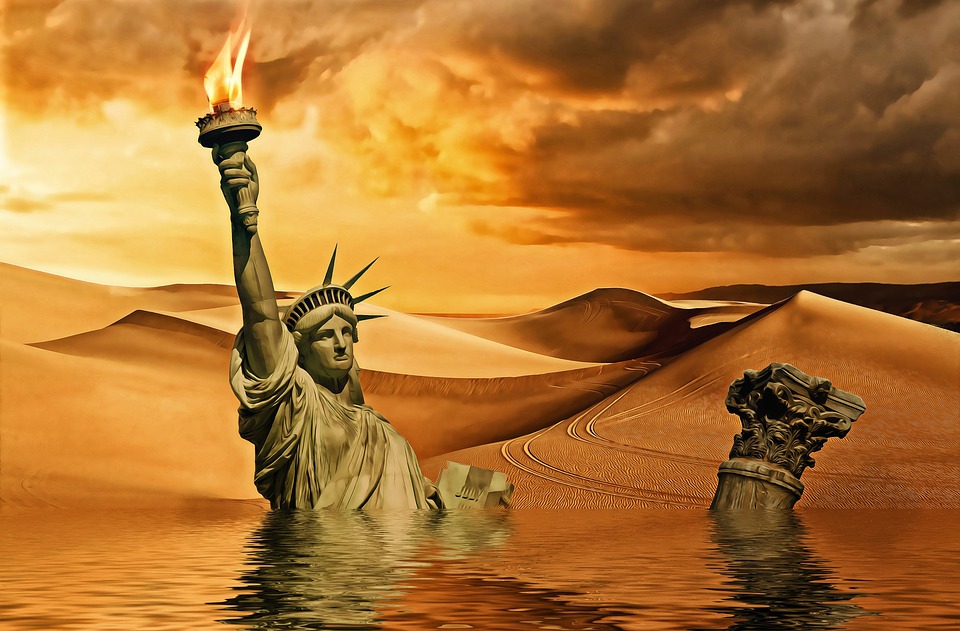 HONOLULU, November 19 — East-West Center (EWC) researchers Abby Frazier and Keith Bettinger are among the authors of a new study published today in Nature Climate Change that provides one of the most comprehensive assessments yet of how humanity is being impacted by the simultaneous occurrence of multiple climate hazards strengthened by increasing greenhouse gas emissions.

This research reveals that society faces a much larger threat from climate change than previous studies have suggested.

“Most previous studies have focused on a single climate hazard and its intensification due to increasing greenhouse gas emissions,” said Frazier, fellow at the EWC. “But when you study the impacts of these hazards individually you really don’t see the full picture of the total impact of climate change on humanity.”

United States Statue of Liberty ‘sinking’ in New York in an artist’s view of Armageddon because of the impacts of cumulative climate change hazards. (Image from Pixabay)

“Greenhouse gas emissions pose a broad threat to humanity by simultaneously intensifying many hazards that have proven harmful in the past,” lead author Camilo Mora of the University of Hawai’i, said.

“Further, we predict that by 2100 the number of hazards occurring concurrently will increase, making it even more difficult for people to cope.”

(A web application produced by ESRI, a world leader in mapping and spatial data analytics technology, allows users to see the cumulative number of climate hazards likely to occur anywhere on Earth under different emissions scenarios through 2100.)

The study, co-authored by 23 scientists, combines exhaustive data mining with the long-time expertise of veteran climate scientists, including several lead authors on the Intergovernmental Panel on Climate Change (IPCC) reports. The diverse list of authors includes not only climate scientists, but also health and crop experts, economists, marine biologists, urban planners, and more.

Thunder and lightning over a neighborhood of skyscrapers. (Image: from Pixabay)

“From a practical perspective, these findings illustrate the compounded and synergistic effects of climate change impacts,” said Dr. Keith Bettinger, EWC adjunct fellow and expert on climate change adaptation. “This underscores the necessity of taking anticipatory adaptation actions that will be necessary to confront these challenges.”

Penn State University Distinguished Professor of Atmospheric Science Michael Mann, who was not involved in the study, said:

“This new research provides rigorous, quantitative support for a point we have emphasized for some time: the costs of inaction greatly outweigh the costs of taking action on climate change. It also provides robust support for another key point: we can still reduce future damage and suffering if we act quickly and dramatically to reduce carbon emissions.”

“The collision of cumulative climate hazards is not something on the horizon, it is already here. Last year, for instance, Florida recorded extreme drought, record high temperatures, over 100 wildfires, and the strongest hurricane ever recorded in its Panhandle. Likewise, California is currently experiencing ferocious wild fires and one of the longest droughts, plus extreme heatwaves this past summer.”

“Overall, our analysis shows that ongoing climate change will pose a heightened threat to humanity that will be greatly aggravated if substantial and timely reductions of greenhouse gas emissions are not achieved.” (EWC/Derek Ferrar)