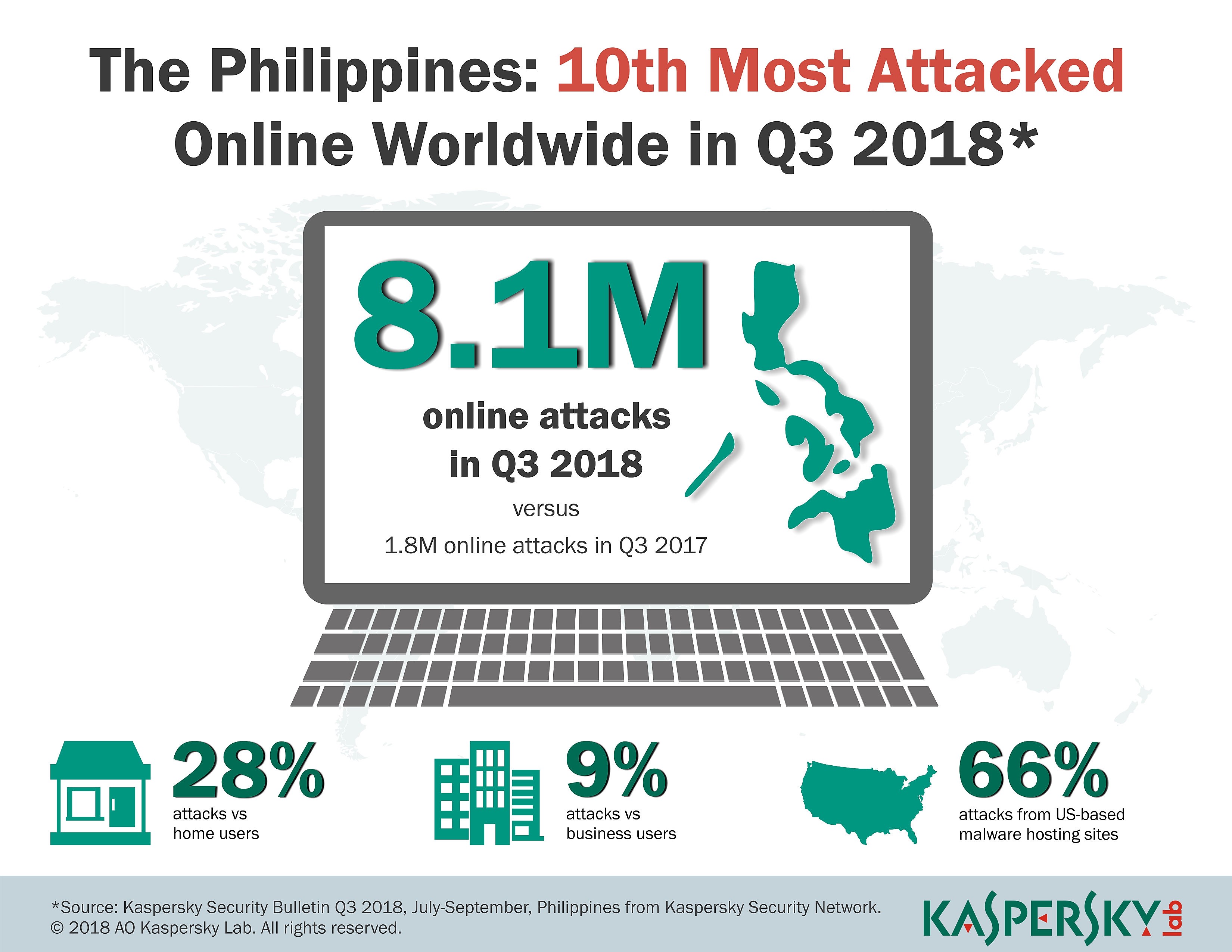 FILIPINOS, in February 2018, United Kingdom-based We Are Social reported, have earned the distinction of being the leader in the use of social media.

Their always-connected life in the digital world has open them to risks, thus, they need to be vigilant.

In fact, below is a report from Russia’s Kaspersky Lab, placing the Philippines as the “world’s 10th most attacked country.”

In just three months, Kaspersky Lab has monitored more than eight million web threats against Filipino Internet users. This places the Philippines as the 10th most attacked country worldwide in terms of online infections for the third quarter of 2018.

Data from the Kaspersky Security Network (KSN) revealed that over three-in-10 (33.3%) users in the Philippines were attacked by Internet-borne threats from July to September.  Kaspersky Lab products have detected a total of 8,133,815 malware incidents on the computers of KSN participants in the country.

“In the same period last year, the Philippines ranked only 35th most attacked worldwide in terms of web threats.. The young and globally known Internet savvy Filipinos are fast becoming a prime target for the money hungry cybercriminals. It’s high time that they get their defenses up.”

Web threats include drive-by download that refers to the unintentional download of malicious code to one’s computer or mobile device leaving it open to a cyberattack. A drive-by download can take advantage of an app, operating system, or web browser that contains security flaws due to unsuccessful updates or lack of updates.

This infection can also be done through social engineering which involves tricking the human mind to download a legitimate-looking but infected program on a computer.

Internet-borne malware have been used to steal money and confidential data as well as to serve as launch pads for bigger attacks against large companies worldwide.

“These types of attacks can be avoided with a lot of common sense and vigilance. The lack of cyber-hygiene habits plays a very significant role in cybercriminals’ success. Filipinos need to be cautious with the sites they visit, files they share, apps they download, and the information they divulge online through social media platforms. Add-on a solution that holistically detects and blocks malware, and you will surely give these cybercriminals a hard time stealing your data and your money,” adds Yeo.

Similar to the global trend in web threats, most of the infections monitored against Philippine-based Internet users were malicious cryptominers.

Malicious cryptocurrency mining differs from legitimate mining only in that in the former, malefactors are using hardware that does not belong to them — they either infect computers or lure victims on mining websites.

Kaspersky Security Network (KSN) is a complex distributed infrastructure dedicated to processing cybersecurity-related data streams from millions of voluntary participants around the world.  The statistics in this report are based on completely anonymous data obtained from Kaspersky Lab products installed on users’ computers in the Philippines. This technology assists Kaspersky Lab in the swift detection of new malware, identification of its source, and blocking of its launch on users’ computers. It generates reports for countries with more than 10,000 Kaspersky users.

Kaspersky Lab is a global cybersecurity company, which has been operating in the market for over 20 years. Kaspersky Lab’s deep threat intelligence and security expertise is constantly transforming into next generation security solutions and services to protect businesses, critical infrastructure, governments and consumers around the globe. The company’s comprehensive security portfolio includes leading endpoint protection and a number of specialized security solutions and services to fight sophisticated and evolving digital threats. Over 400 million users are protected by Kaspersky Lab technologies and we help 270,000 corporate clients protect what matters most to them. Learn more at www.kaspersky.com. (from Kaspersky Lab)