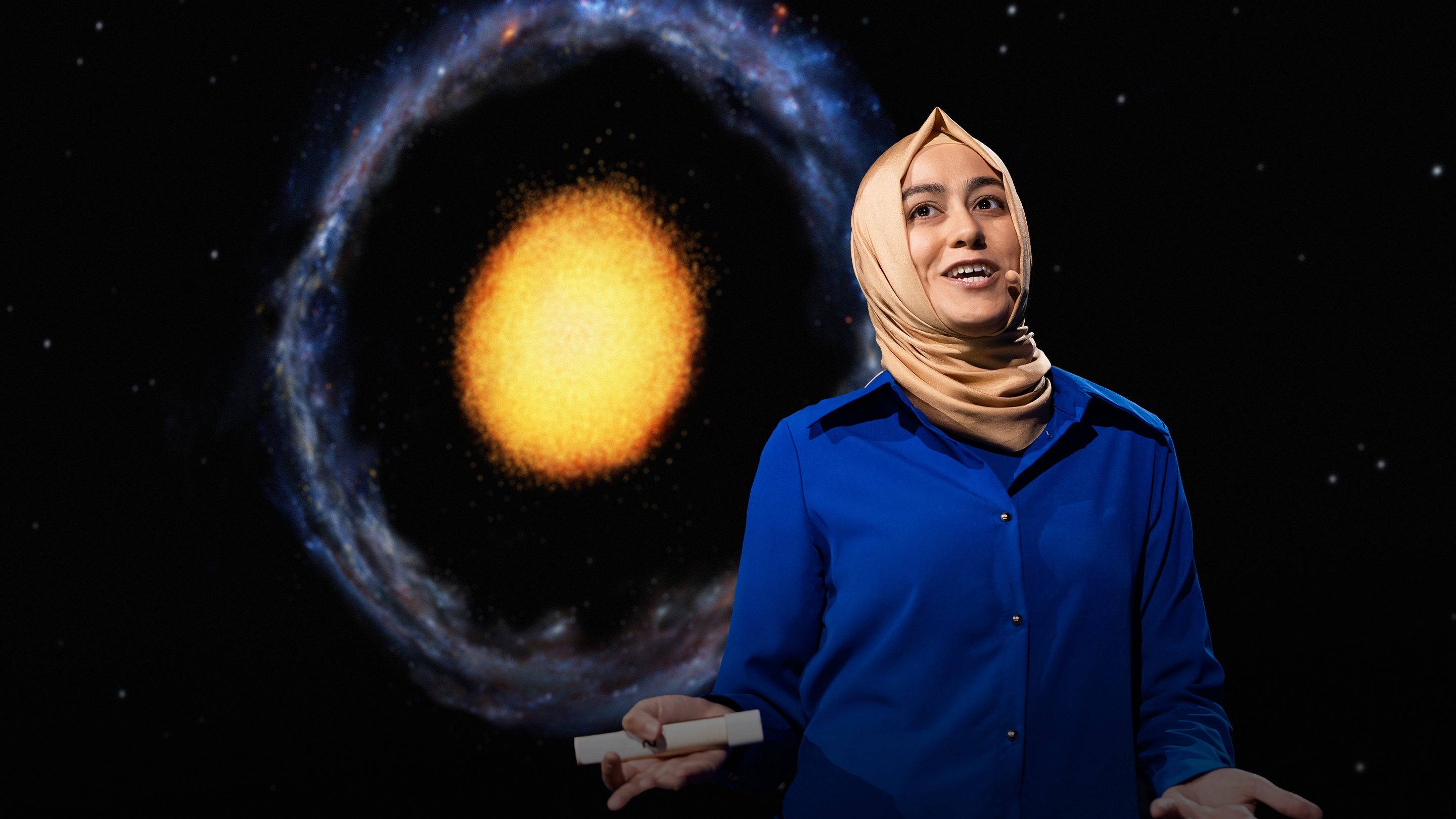 ​Here is an article on IslamicFinder.org written by Rida Ghaffar about an astrophysicist from Turkey who discovered a rare new galaxy while doing her doctoral studies in the United States.

A new galaxy is discovered by a Muslim astrophysicist

Named in the “2018 Ten Outstanding Young Persons of the World in Academic Leadership and Accomplishment,” Mutlu-Pakdil makes history by unlocking a great achievement. Yes, she discovered a new type of galaxy and this news is bombarding everywhere!

The work of this astrophysicist provides the first description of a double-ringed elliptical galaxy, challenging current theories and assumptions about how the universe operates and how galaxies start and evolve. Our Deen, Islam, indeed encourages its believers to explore the cosmos (heavens and earth); wonders which were created by Allah (SWT).

“Do they not look at the sky above them, how We have built it and adorned it, and there are no rifts in it.” (Surah Qaf:6).

In light of Islamic teachings, Muslim always stayed ahead in the scientific fields which explore the universe like astronomy itself. Like her medieval Muslim counterpart astronomers, the hijabi Turkish Muslim astrophysicist Burçin Mutlu-Pakdil shares her name with a rare double ring of stars at 359 million light-years away from us, also reported by National Geographic. Quite amusing, isn’t it? As a child, Mutlu-Pakdil’s passion for astronomy started by enjoying looking up at the stars in the night sky. She said:

“Even though my family supported my decision and encouraged me to follow my passion, friends and relatives said that girls shouldn’t leave home to study.”

The Muslim scientist attended Beşiktaş Atatürk Anatolian High School and was the first generation of her family to attend college. In 2009, she completed her undergraduate studies from Bilkent University, Ankara.

In 2012, Mutlu-Pakdil then moved to Texas Tech University, in the US for her graduate studies gaining a Master’s degree. In continuous progress and she also earned her Ph.D. last year from the University of Minnesota for “Testing super massive black hole scaling relations using cosmological simulations and optical/near-IR imaging data.”

She was also appointed a Postdoctoral Research Associate at the University of Arizona. Now, she currently works at the Steward Observatory looking at the structure and dynamics of astrophysical objects, including dwarf galaxies, galactic rings, and supermassive black holes.

During her doctoral studies, Mutlu-Pakdil discovered the galaxy PGC 1000714, which has been nicknamed “Burçin’s galaxy.” The discovered celestial structure is an extremely rare double ringed elliptical galaxy. Interestingly, because of her achievement, Mutlu-Pakdil was named in the “2018 Ten Outstanding Young Persons of the World – Academic Leadership and Accomplishment.”

There are about a trillion or so known galaxies in the universe, most of which are spirals like our home galaxy, the Milky Way. Dr. Mutlu-Pakdil’s work provides the first description of a double-ringed elliptical galaxy, challenging current theories and assumptions about how the universe works and how galaxies start and eventually evolve.

When Mutlu-Pakdil and her team first took note of the little galaxy PGC 1000714, they mistook it as a rare Hoag-type galaxy, and they were pretty excited by their discovery. But when Mutlu-Pakdil studied the galaxy further, she was astonished to find that the unusual galaxy had more secrets to reveal.

“In between the blue outer ring and the red central core, we found a diffused red-colored inner ring surrounding the central body.”

“We were looking at a galaxy that had never been seen before.”

This celestial body is now providing astronomers with an intriguing mystery. As with Hoag-type galaxies, the red central core is older than the blue outer ring. But in Burçin’s galaxy, the extra inner ring is the oldest of the lot, which means that it formed first.

A publisher also approached Mutlu-Pakdil to write a book about her experiences as an astrophysicist, and in 2018 she was selected as a TED fellow, one of just 20 invited change makers from around the world. To this she said:

“The platform gave me a voice and a presence I had never imagined for myself.”

While preparing her TED talk, she presented it first to friends, who said it was hard to understand.

It surely is highly pleasing to know that such big discoveries are made by the members of Muslim Ummah and how they are widely contributing. Not just this but their recognition worldwide is nothing but a matter of great pride. May Allah (SWT) keep bestowing us with such successes. (IslamicFinder.org)