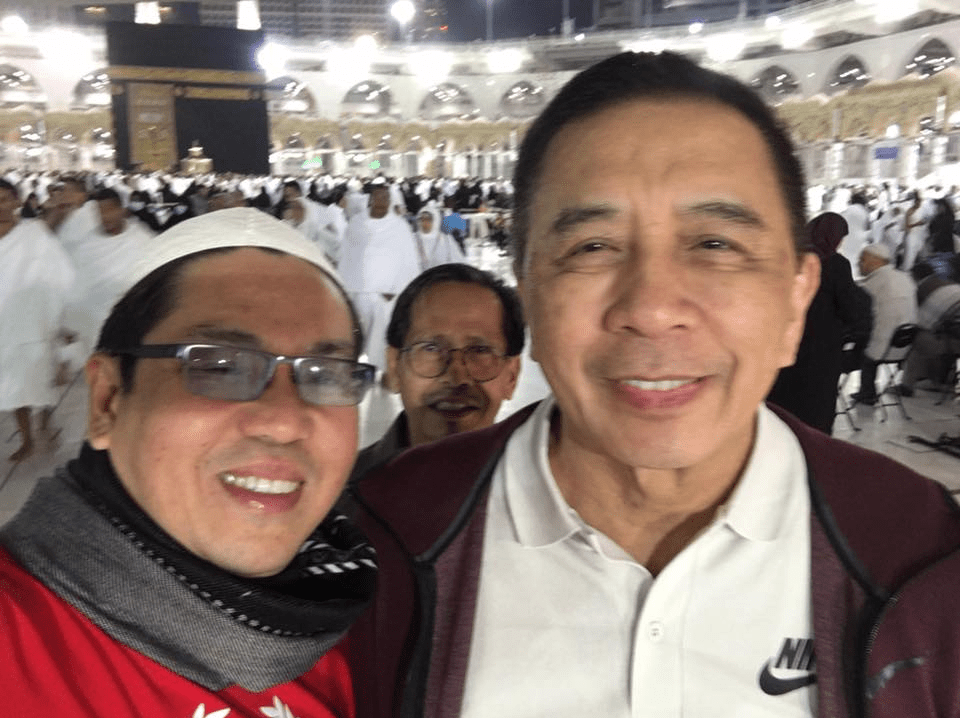 Pangarungan is a commissioner and the secretary and chief executive officer (CEO) of the National Commission on Muslim Filipinos (NCMF).

The President appointed him to the NCMF last year on a mission to institute reforms in the commission long-dogged by anomalies, particularly in the conduct of the annual hajj operation.

Hajj is the Islamic pilgrimage to Makkah (Mecca), Saudi Arabia, one of the fifth pillars of Islam. Every adult Muslim is obliged to perform the hajj in one’s lifetime.

The five-day pilgrimage is anticipated to occur sometime in August, approximately three months after the Ramadan month of fasting in the first week of May.

Dr. Dimapuno Alonto Datu Ramos, Jr., director of the Bureau of External Relations (NCMF-BER) said on his Facebook that Pangarungan learned about his being named amirul hajj while leading an NCMF delegation to Mecca to negotiate and arrange for the Hajj 2019.

His delegation attended some more meetings related to the pilgrimage on January 10, said Datu Ramos, who is also with the NCMF group, including an orientation and seminar on the Hajj E-portal, where hajj visa applications and other matters are conducted by every country sending pilgrims to the Saudi Arabia.

The Saudi Ministry of Hajj and Umrah had earlier granted the Philippines a quota of 8,000 hajj visas for Filipino pilgrims this year through the NCMF’s representation.

“After the E-portal training, the team proceeded to meet with Consul General Edgar Badajos for a late lunch to discuss the events for the past year. Secretary Pangarungan also received word that, on January 9, he had officially been named by Malacanñang as the amirull hajj for 2019,” Datu Ramos, the NCMF’s media head.

He explained that the “amirul hajj (head of hajj mission) is the head of the Muslim Filipino pilgrimage delegation going to the Kingdom of Saudi Arabia for the annual hajj, and is expected to be well-versed on hajj rituals aside from having the necessary administrative skills.”

To be appointed amirul hajj carries prestige and huge responsibility as well.

In the past, the amirul hajj was the presidential special envoy for the hajj season duration and represented the President and the Philippines in meetings in Saudi Arabia, including in the traditional annual hajj banquet hosted by every king of Saudi Arabia in Mina for the pilgrimage delegations from around the world.

Meanwhile, some observers welcomed the President’s early naming of the amirul hajj which prevented jockeying for the designation among Moro leaders.

Datu Ramos also emphasized that the NCMF Charter, Republic Act 9997, stipulates that the head of the commission automatically becomes the amirul hajj.

He added the President has faith in Pangarungan’s capabilities because of the reforms he started in the NCMF when he assumed the helm in 2018.

“The secretary had generated Php135 million savings, which has never been done in the history of the agency. Also, his hard work for the 2019 hajj is seen as continues to push for excellent services for the pilgrims, such as the 4-, 5-start hotel accommodations with constant suite service to and from Masjidil Haram (Grand Mosque in Mecca), and the significant reduction in airfare fees with a third airline. Truly a leader with the welfare of his constituents in mind 24/7,” the NCMF-BER director said.

As part of his reform platform, Datu Ramos said the secretary already fired one regional director and relieved two bureau directors who were on floating status.

“We ask for your prayers to help guide all of the NCMF administrators, especially our hands-on secretary, during the succeeding months. As brothers and sisters in one faith, our aspirations for the hajj are all the same. In sha Allah (God willing), this will be the year that the pilgrims’s woes will fully be addressed,” Datu Ramos appealed.

Pangarungan and his delegation visited Saudi Arabia in the first week of January in preparation for Hajj 2019.

He met with Saudi officials from the Ministry of Hajj and Umrah as well as with executives of the General Authority fo Civil Aviation (GACA), Moassassa, and United Agent Transportation, which are also involved in the conduct of the Islamic pilgrimage.

The NCMF chief had convinced the government of Saudi Arabia to waive its two-airline policy for the hajj, allowing a third airline (still unnamed) to fly Filipino pilgrims to either Jeddah or Madinah, the two gateways for airborne pilgrims.

Pangarungan also signed the mother contract for the hajj operation. He also visited and inspected prospective hotels for pilgrims’ accommodation.

Datu Ramos said Filipino pilgrims can look forward to a much-improved conduct of the pilgrimage this year. (EKU)

This story may require updates. All photographs courtesy of the NCMF.