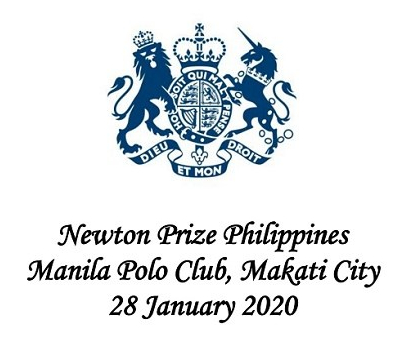 The occasion is the Newton Prize Award Philippines at the posh Manila Polo Club in Makati City, Metro Manila.

To know more about the prestigious competition hosted by the British Embassy Manila, here’s what the Department of Science and Technology (DOST) says about it.

Cutting edge research will define who among the five Filipino scientists, three of whom are funded by the DOST, will snatch the Newton Prize Award.

The Newton Prize Philippines celebrates the partnership of the United Kingdom (UK) of Great Britain and Northern Ireland and the Philippines as well as the success of the Newton Agham Programme. It started in 2014 and supports British and Filipino researchers and institutions that work together to develop science, technology, and innovation (STI) solutions to pressing problems in their respective countries.

There are 17 Newton countries and the Newton Prize 2019 countries include China, Indonesia, and the Philippines.

The Newton Prize is a 1 million pound-fund that recognizes the excellent research and innovation works in various disciplines like food security, health, and waste management that is aligned with the United Nation’s sustainable development goals.

At the start, there were 20 Newton Prize applications from the Philippines that was trimmed down to five after passing through rigorous evaluation by the Newton Prize judges made up of experts from the UK and the 2019 countries together with feedback from expert peer reviewers.

Four finalists are competing for the Newton Prize Philippines Award while one finalist will be competing with the other countries’ nominees for the coveted Newton Chair’s Prize.

The first award has 200,000 pounds prize per country while the Newton Chair’s Prize has up to 500,000 pounds to be awarded to the project proposal that best demonstrates knowledge and partnership working. However, the winner for the latter will be announced in the Newton Prize London next month on February 12.

One of the three nominees whose projects were funded by the Philippine Council for Industry, Energy, and Emerging Technology Research and Development (DOST-PCIEERD) and its counterpart in the UK, UKRI Engineering and Physical Sciences Research Council, are Professor Michael Angelo Promentilla from De La Salle University and Dr. Devendra Saroj from University of Surrey. Their project is titled “Water-Energy-Nutrient Nexus in the Cities of the Future”. Other members of the Philippine Team are Professor Aileen Huelgas-Orbecido, Dr. Arnel Beltran, Engineer Carla Mae Pausta, and Professor Luis Razon.

The next nominees are Dr. Fe Espino from the Research Institute for Tropical Medicine (RITM) and Professor Chris Drakely from London School of Hygiene and Tropical Medicine with their research project titled “ENSURE: Enhanced surveillance for control and elimination of malaria in the Philippines”.

The third, a nominee for the Newton Chair’s Prize, is composed of Jopeth Ramis from the Technological Institute of the Philippines (TIP) and Professor Felicity Rose from the University of Nottingham with their project titled “Tissue engineering of bronchi in health and sickness: assessing the effect of matrix stiffening on cellular changes in the airways”. Their work is jointly funded by the Science Education Institute (DOST-SEI) and the British Council.

Two other nominees are funded by the Department of Agriculture (DA) together with the UKRI Biotechnology and Biological Sciences Research Council.

Second is “Using genomics to trace Salmonella transmission and antimicrobial resistance in the poultry and swine food chains in Metropolitan Manila” by Professor Windell Rivera from the Natural Sciences Research Institute of the University of the Philippines Manila (UPM NSRI) and Professor Taane Clark from London School of Hygiene and Tropical Medicine.

Today’s event marks the first time the Newton Prize is held in the Philippines to showcase the best research or innovation that promotes economic development and social welfare of Newton partner countries.

The application process was administered by the UK National Commission (UKNC) for the United Nations Educational, Scientific, and Cultural Organization (UNESCO) in London by appointment from the UK Government Department for Business, Energy and Industrial Strategy (BEIS).

Aside from the DOST and DA, the other Newton Agham Partner is the Commission on Higher Education (CHED). (S&T Media Service)